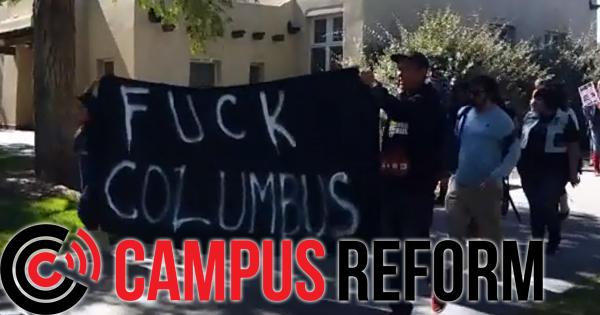 In an exclusive video obtained by Campus Reform, around 40 student protesters carried banners proclaiming “this land is stolen” and “fuck Columbus” through campus to the president’s house, where they hung eviction notices on the president’s fence.

“If the colonial occupation and dispossession of indigenous lands continues, we reserve the right to seize ALL occupied and dispossessed lands now occupied and/or owned by the University of New Mexico,” the eviction notice reads. “We cannot be responsible for property or persons remaining on these lands.” 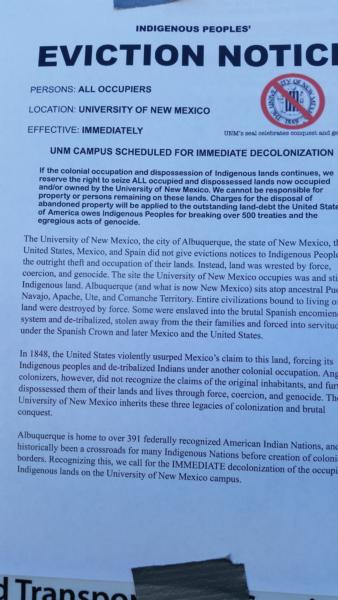 A protester says in the video that the aim of the “solidarity march” was to raise awareness for their efforts to get UNM’s student government to abolish Columbus Day and replace it with “Indigenous Resistance Day.”

WATCH: Protesters on the march.

He also claimed that UNM’s seal, which has a colonist and Spanish conquistador in the center, “celebrated” the “history of colonization, genocide, and conquest.” Once the protesters marched to the university’s cultural center, they burned a copy of the seal.

Richard Moore of the New Mexico Black Berets spoke to the protesters after the burning of the seal, regaling them with stories of his own activism on campus and in New Mexico during the 1970’s.

“Now whether it’s Chicano studies or whether it’s Native American studies or Africana studies or women’s studies or whatever studies it may be, don’t let this university divide us from each other,” Moore said. “They’re doing this. This is one of the most racist institutions in the state of New Mexico. It’s a hoarding ground of institutionalized racism.”

Casuse is known for kidnapping Gallup mayor and UNM Board of Regents Emmett Garcia in 1973. As a 20-year-old UNM student, Casuse disapproved of Garcia’s appointment to UNM’s board and held him at gunpoint. He later died in a shootout with police with local reports claiming the fatal wound to be self-inflicted. 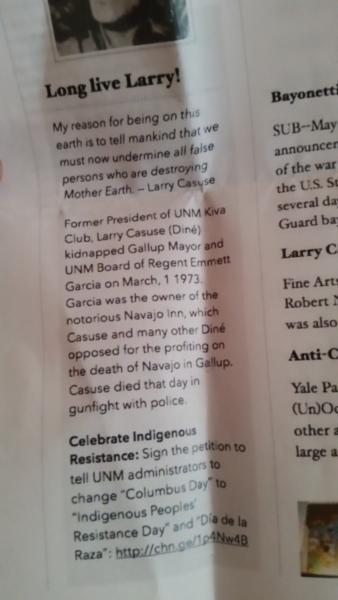 A flyer the protesters handed out also claims UNM has “murals that further naturalize settlement and white supremacy.”