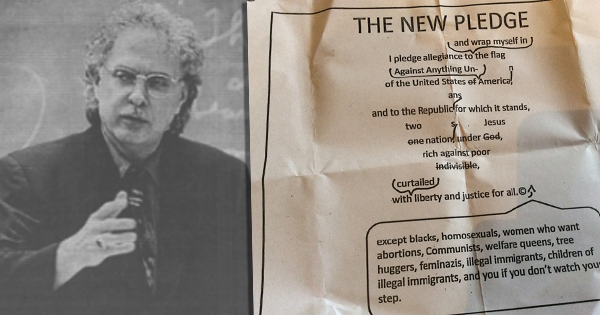 A tenured professor at Metropolitan State University (MSU) in Denver required students pledge their allegiance to a racist, sexist, homophobic America that targets "blacks," and "women who want abortions," in the name of Jesus.

Dr. Charles Angeletti, a self-proclaimed atheist and socialist professor of American Civilization at the publicly funded Denver university, required students recite the satirical Pledge of Allegiance during the fall 2014 semester according to a class flier obtained by Campus Reform.

“I pledge allegiance to and wrap myself in the flag of the United States
Against Anything Un-American and to the Republicans for which it stands,
two nations, under Jesus, rich against poor, with curtailed liberty and
justice for all except blacks, homosexuals, women who want abortions,
Communists, welfare queens, treehuggers, feminazis, illegal immigrants,
children of illegal immigrants, and you if you don't watch your step.”

The flier was distributed to the entire class and students were required to recite it according to Steven Farr, an MSU freshman majoring in Meteorology.

According to Farr, Professor Angeletti’s course offered no alternative political perspective and aggressively repressed debate among classmates. Farr noted that fellow students were suspicious of the professor’s motives, but few had the courage to openly protest the controversial pledge. 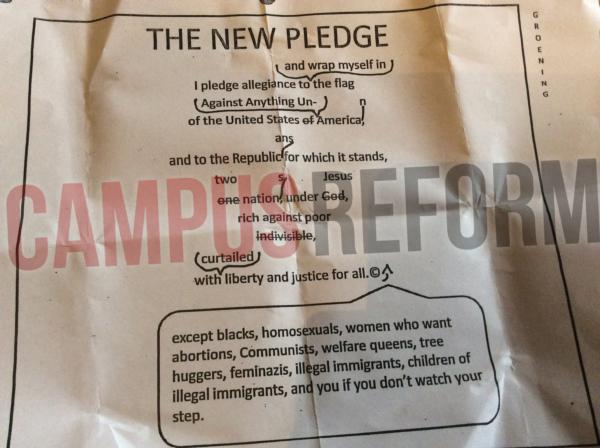 “This was an attempt to propagandize an entire classroom of young adults,” Farr told Campus Reform.

In an interview conducted Thursday, the day before semester’s end, Dr. Angeletti doubled down.

“I could go on and on—and do in my classes for hours about things that we need to do to make this a better country.”

Angeletti, who has taught at MSU since 1967, has a B+ grade on RateMyProfessor.com, but one former student addressed Dr. Angeletti’s liberal bias.

“If you are a liberal, you will like him,” the anonymous student wrote. “[Angeletti] encourages you to speak out and voice your opinion...Unless of course, you are a republican [sic].”

Dr. Angeletti admits he is “biased” and says that he has distributed the pledge for 20 years because it helps people look differently about what goes on in this country.

“We are scared to death of anything un-American,” Angeletti said.

During the interview, Angeletti repeatedly affirmed his love for America, his disdain for “family values people,” and his course, clarifying that he supports diversity of thought and allows his students to “say and do anything.”