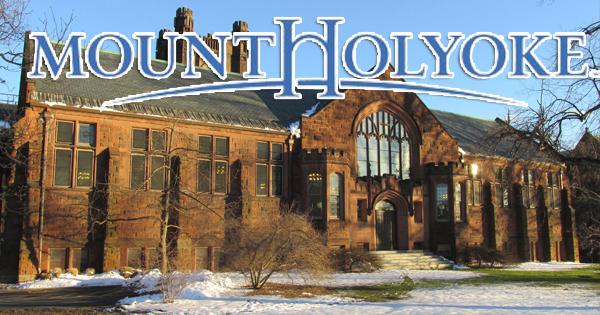 Nothing says progress quite like a hoard of liberal college students bullying one of their peers because of her conservative values.

This morning, a Campus Reform correspondent awoke to a threatening note taped to her dorm room door after she wrote a piece on a Ferguson protest that took place on her campus. 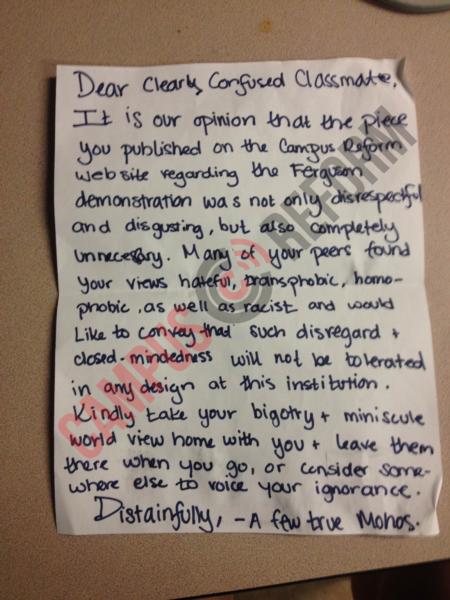 Yvonne Dean-Bailey, a freshman political science major at Mount Holyoke College (MHC), attended the student-organized protest held on Monday. She took photos, reached out to the event organizers, and researched the demonstration. And like anyone in professional journalism strives to accomplish, Yvonne found a unique angle for her story and ran with it.

But it was that angle—an event organizer asking “white folks” to keep their hands down during the demonstration—which angered crusaders for equality at Mount Holyoke so much that they resorted to “fighting the good fight” with hateful notes and vicious attacks on an online message board.

Since the article, Yvonne has been called a bigot, “closed-minded” [sic], hateful, homophobic, privileged, racist, rich, and transphobic. Yvonne’s appearance, character, intellect, and integrity have been eviscerated.

These attacks have all come from women—her Mount Holyoke peers. 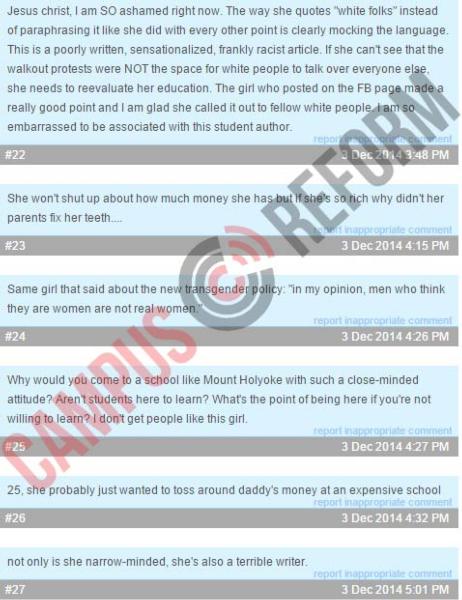 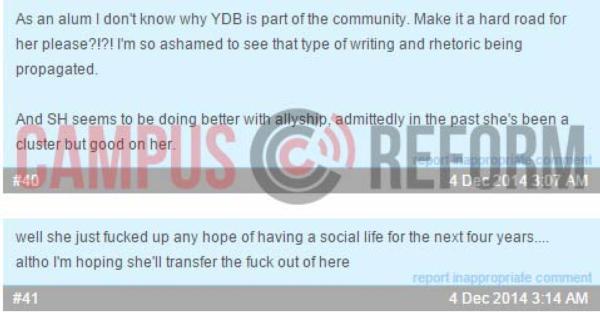 Of course, none of these ad hominem attacks can be duly attributed, though the site requires a MHC email address to post. While these petulant college kids are so quick to become social justice warriors, they must do so anonymously in a purely phenomenal show of cowardice.

According to Mount Holyoke’s website, the college was founded in 1837 as a place where women could “develop their intellects, hone the power of their voices, and cultivate courage.” But what kind of courage are the women cultivating when they spend their collegiate days hiding behind anonymous online posts attacking the views—and the appearance—of one of their peers?

These women are not empowering each other or honing their own voices. They’re creating a homogenous liberal echo chamber where only the sounds of chosen voices can ring out without fear.

“Kindly take your bigotry and miniscule world view [sic] home with you and leave them there when you go, or consider somewhere else to voice your ignorance,” reads the note from Yvonne’s secret admirers.

Admittedly, I didn’t attend an all-women’s college, but I don’t think that was the type of female empowerment and cultivation of courage Mary Lyon had in mind when she dreamt up the school. But as a woman, I'm not afraid to say the level of intolerance the women at Mount Holyoke have displayed towards Yvonne is absolutely abhorrent.

To their credit, Mount Holyoke administrators, when reminded of the school’s strict anti-harassment policy by Campus Reform, have encouraged Yvonne to schedule a visit with the Dean of Students—a visit that will include the organizers of Monday’s Ferguson protest.

Are the women of Mount Holyoke so afraid of Yvonne’s conservative voice that she has to be flanked by the very peers who could be behind the anonymous threats at all times?

Yvonne says she doesn’t feel safe on her own college campus, her own community, but as she knows, true courage does not bend to frivolous attacks of intimidation.

“Despite this I will continue to be an independent and active voice on campus until all sides are considered,” Yvonne told Campus Reform.

While immaturity and cowardice run rampant around Mount Holyoke, it seems Yvonne’s own bravery is the only flickering hope that any of the school’s founding principles can still be found on that campus.