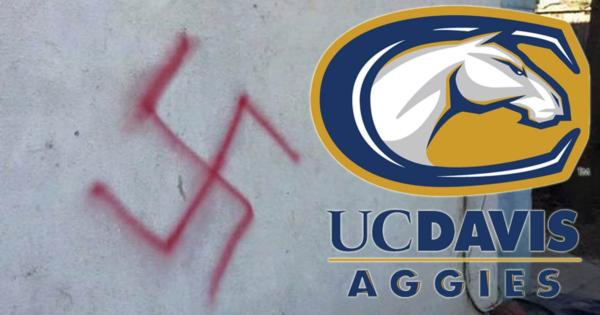 Members of Alpha Epsilon Pi, a Jewish fraternity at the University of California, Davis, awoke Saturday to see their home covered in Nazi graffiti.

According to fraternity leaders, the timing of the vandalism is no coincidence, occurring just two days after the UC Davis student senate passed a motion pressuring the university to divest from companies that have ties with Israel.

“[T]his is not out of the blue,” Joshua Wortsman, president-elect of AEPI, told CBS Sacramento. “We’re pretty sure this is directly related.”

Following passage of the divestment motion, student senator Azka Fayyaz, a member of UC Davis’s Students for Justice in Palestine, posted a photo on Facebook of students waving the Palestinian flag with the caption "Hamas and Shariah law have taken over UC Davis. BRB crying over the resilience.”

In response to the vandalism, a coalition of 15 student organizations published a letter in the California Aggie describing their campus as rife with xenophobia.

“This reminds us that anti-Semitism, along with all other forms of hate, including, but not limited to, Islamophobia, homophobia, transphobia, racism, and misogyny, still exist and are rampant trans-nationally and on our university campus,” read the letter.

“We reject any attempts to blame this on any single student community, including the UC Davis Divestment movement,” the letter said.

Police identified the incident as a hate crime. According to Davis police Sgt. James MacNiven, the perpetrators could face felony charges and civil rights violations for the graffiti swastikas.

According to reports by KCRA, residents of the AEPI fraternity house plan to install “security cameras and extra lighting” in addition to assisting local police in their active investigation.

UC Davis’s student senate joined six other UC schools that have passed divestment bills of their own.

According to Kristine Craig, a third-year student at UC Davis and editor-in-chief of the Davis Political Review, the boycott, divestment, and sanctions movement “has no place for public consensus from a student panel that is inherently created to represent all student interests.”

“All it does is pit two ethnic student groups against each other in a hateful and divisive way,” Craig told Campus Reform, adding that the student senate’s “decision to pass a resolution to divest from Israel places Jewish students in a separate category, isolating and pushing them into a defensive position.”

For Jewish students at UC Davis, the crude graffiti sprayed on AEPI’s house is not an isolated incident.

In 2010, a sign on UC Davis’s campus was covered in swastikas and shortly after, a swastika was painted on a Jewish student’s dorm room door.

"There's been a number of incidents, including at Davis and elsewhere, where Jewish students are simply approached on campus and sort of yelled at and screamed at," Barry Broad, president of the Jewish Federation of Sacramento, told KCRA.