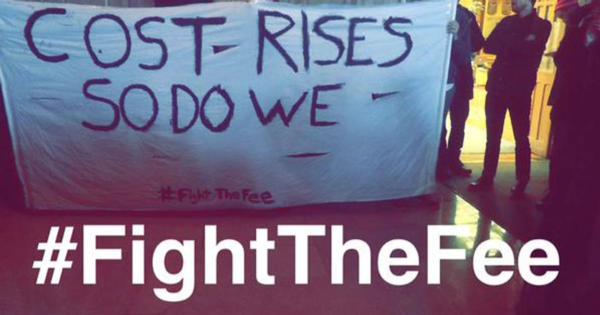 Cornell University students who opt out of the university’s healthcare option are still expected to pay a hefty fee of $350.

In an email to students, Cornell President David Skorton informed students that the university has “strained to keep pace with increasing healthcare costs.” As the additional $350 is a fee—not a tuition hike—it’s unlikely that financial aid will cover the additional cost.

“Although introducing a new fee is never desirable, moving to a model that includes a health fee—a standard in college health nationwide—will make student costs more predictable and encourage students to seek the care they need,” Skorton wrote.

He said the new fee would enable the Ivy school to “maintain and improve accessibility of health services” already offered on campus.

The new fee will go into effect for students for the 2015-2016 school year. Students who bought into Cornell’s health care option for the 2014-2015 academic year paid $2,352, according to the Cornell Review.

“The tax affects all of us by detaching the burden of the university's financial responsibility from the administration, and foists it upon the students,” Conor Hodges, a Cornell freshman, told Campus Reform. “We feel marginalized by this university that views itself as a business first and a university second. [We] students are treated as expendable, as privileged participants in the university rather than constituting the university ourselves."

On Monday, approximately 150 Cornell students protested Skorton and staged a sit-in at the president’s office and the school’s main administrative building.

Hodges said Monday’s protest was an “opportunity to make our voices heard in an environment in which the Student Assembly has become a method for legitimizing the administration's decisions, rather than representing us faithfully to that administration.”

The Student Assembly hosted Skorton the same day his email claimed the fee was “done for the common good” and is a “reliable revenue stream” for Gannet, the health services center, the Review reported.

Skorton addressed students during their sit-in. Aimee Cho, a Cornell student, tweeted that the president told the students “nothing can be done about this fee.” Many Cornell students tweeted out their disappointment over the fee and Skorton’s response using the hashtag #FighttheFee. Similarly, there is an @FightTheFee Twitter account.

This is Skorton’s final semester at Cornell before he heads to Washington, D.C., to take a position as secretary at the Smithsonian Institution.

Cornell administration unveiled its plan at the end of January to expand its health services center by 2017, a project with an estimated price tag at $55 million.

Neither Skorton nor Cornell responded to requests for comment from Campus Reform.