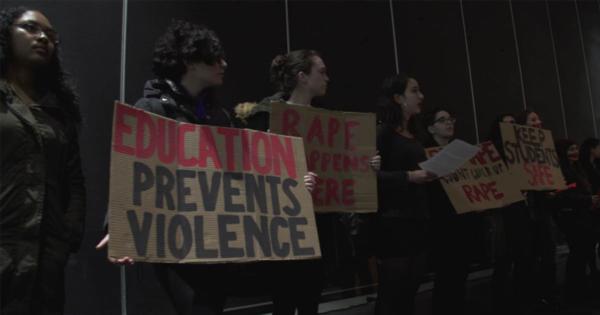 Student activists at Columbia University crashed an event for prospective students on Tuesday in an attempt to warn high schoolers about the college’s failed attempts to handle and adjudicate campus sexual assault internally in the past.

“Colleges across the country are under intense public scrutiny for mishandling sexual and dating violence,” the letter, obtained by Campus Reform, reads. “Our school is no exception: despite ongoing pressure from survivors and activists, Columbia has failed to take concrete action to make this campus safe.”

The activists went on to say in their letter that instead of listening to students’ complaints, Columbia has created a “public relations crisis.”

The activists also gave prospective students and their parents a list of questions to ask the university, including: why does Columbia only require one year of required sexual assault prevention training and why hasn’t Columbia paid trained professionals to come to school to conduct workshops.

In their letter, the students also decried Columbia’s new required sexual respect education programs. As previously reported by Campus Reform, the Ivy is expected to unveil the required training in the upcoming days. Columbia students will be required to participate in one of four programs—one of which is simply writing reflective poetry—in order to graduate or register for classes.

“The new prevention education program announced by Columbia is poorly designed and demonstrates a willful neglect of both empirical evidence and student feedback,” Michela Weihl, an organizer for Red Tape, told Campus Reform in a statement. “ President [Lee] Bollinger and other administrators have publicly proclaimed that it is their top priority to address this issue. However, it has become abundantly clear to us that the issue they truly care about is one of public relations, not student safety. Columbia has a rape problem, and the new prevention education program will not be the solution."

Weihl is a student at Barnard College, the all-women’s school affiliated with Columbia. Despite Barnard’s work in focus groups to develop the soon-to-be required preventative training, Barnard students will not be required to participate.

Columbia—as well as Barnard—is under a federal investigation for the way it handles cases of sexual assault on campus. The Ivy was propelled into the national spotlight after Columbia senior Emma Sulkowicz began carrying her mattress everywhere she went to protest the way the university handled her sexual assault claim.

Columbia did not respond to a request for comment in time for publication from Campus Reform.