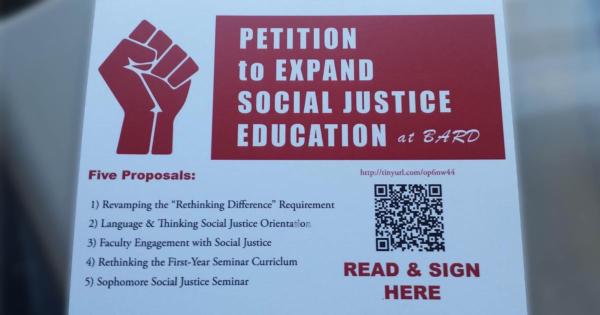 For some, being a “college graduate” isn’t enough.

Students at Bard College in New York’s Hudson Valley are hoping to turn their peers and faculty into ‘social justice warriors’ through mandatory seminars and adjustments to the school’s curriculum.

"At the very least, the curriculum should emphasize topics of dominance, resistance, difference, and diversity."

Flyers depicting a raised fist accompanied by information about a petition to “expand social justice education” at the private liberal arts college were hung across campus earlier this week, according to a post by user postmodern_cereal on Reddit.

A Bard administrator confirmed the flyer's authenticity in an email to Campus Reform. The petition's origins are unclear; the Google Doc does not list any contact information, nor does its poster. It is also uncertain how many students have signed the petition as signatories have to login with a Bard e-mail username and password.

According to the student-led petition, Bard should instill "cultural competency" in its student body. The petitioners define cultural competency as “an interdisciplinary understanding of social justice issues and the analytical lenses through which to critically view them.”

“We hope to integrate learning and discussion about social justice into the fabric of Bard’s academic mission and teaching philosophy by examining courses, requirements, and curricular experiences that promote or avoid certain worldviews,” states the petition.

According to creators of the petition, protests in Ferguson, Missouri and those involved in the “I Can’t Breathe” movement served as the inspiration behind students’ request for social justice expansion.

“[T]he polarized reactions and fruitless debates at Bard and around the world in response to the events in Ferguson made it apparent that a common educational foundation is imperative to our ability to critically and productively discuss these issues,” states the petition.

Beginning with adjustments to Bard’s “Rethinking Difference” requirement, the petitioner’s hope to enact a policy that would require administrators to meet annually with students involved in the school’s Multicultural Diversity Committee (MDC) and Educational Policies Committee to discuss class syllabi and potential changes to the curriculum. Petitioners believe this would ensure that classes remain “relevant and intelligible for students” and “emphasize the link between curricula and contemporary life.”

The second proposal—a mandatory social justice training for first-year students—would teach students how to understand “privilege, agency, oppression, [and] microaggressions;” discuss social justice with peers and faculty members; and recognize the “importance of gender identity and pronouns,” among other tutorials. The mandatory training would take up a full-day of students’ orientation and be facilitated by upper-level student and alumni volunteers.

A similar, but separate training proposed for Bard’s faculty would invite scholars in fields related to social justice to encourage faculty and staff to initiate conversations about diversity, recognize and address microaggressions in class, and “make their teaching relevant to particular social justice issues.”

“At the very least, the curriculum should emphasize topics of dominance, resistance, difference, and diversity,” states the petition.

The proposal for a sophomore level social justice seminar would require students 1to attend a minimum number of “lectures, workshops, screenings, or other events” as part of a “social justice series” graduation requirement beginning in the 2015-2016 academic year.

Several other colleges and universities have proposed or implemented mandatory student trainings to address issues including sexual assault, social justice, and inclusiveness, including George Washington University, where conservative students were recently compared to ISIS and labeled a “hate group” after requesting a religious exemption from mandatory LGBT sensitivity training.