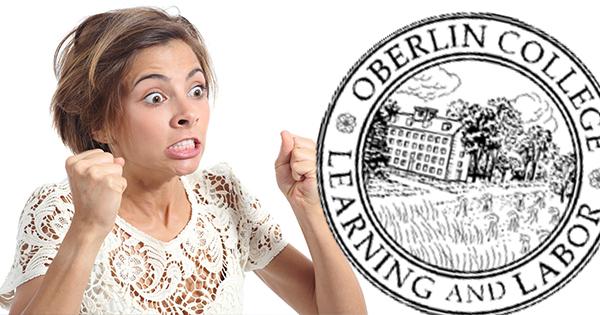 In a public Facebook event page, the Oberlin College Republicans and Libertarians (OCRL) student group said Sommers will discuss “feminism from a perspective that differs from the general Oberlin population.”

“Does this event make you or someone you know feel unsafe?”

However, many female students at the Ohio school have taken over the comments section of the event page to express their disappointment in the group’s choice of Sommers as an event speaker. Several students claim they “feel unsafe” by her presence on campus.

“It’s really exciting to realize some of our peers think statistics are more important than people,” Smith wrote in all caps in a separate post on the page.

“I'm angry and disappointed that you decided to bring this speaker during Sexual Assault Awareness Month. And I wish I was surprised too, but I'm not,” Alison Kronstadt, another Oberlin student, wrote.

“As an alum [sic], I'm disappointed Oberlin would bring this speaker on campus, especially at this time,” Madalyn Berg wrote. “The student body need not have to suffer through this kind of ignorance. To say her opinions are triggering, [sic] is an understatement. Making members of the community feel unsafe not only discredits any efforts Oberlin has mounted to prevent sexual assault and support people who've experienced sexualized trauma, but perpetuates that trauma within the Oberlin community. I expect more. I expect better.”

Several female students referred to Sommers as a “rape denialist” and “misogynistic,” referencing her critiques of modern feminism and the flawed statistic touted by the White House that says one in five women will be sexually assaulted in college.

“Look, to prevent rape and sexual assault, we need state of the art research. We need sober estimates,” Sommers said in a video for the American Enterprise Institute. “False and sensationalized statistics are going to get in the way of effective policies. And unfortunately, when it comes to research on sexual violence, exaggeration and sensation are not the exception; they are the rule.”

“Sexual violence is too serious a matter for antics, for politically motivated posturing,” she said.

Smith also started a survey on the event page that asks if the event makes “you or someone you know feel unsafe.” At time of publication, 198 people had responded yes compared to 333 people who had responded “No because I’m an adult and know words can’t hurt me.” Other answers had been made up which included: “Help! I need an adult!” and “This question made me LOL!”

Responders to the question included both students at the private liberal arts school and non-students. 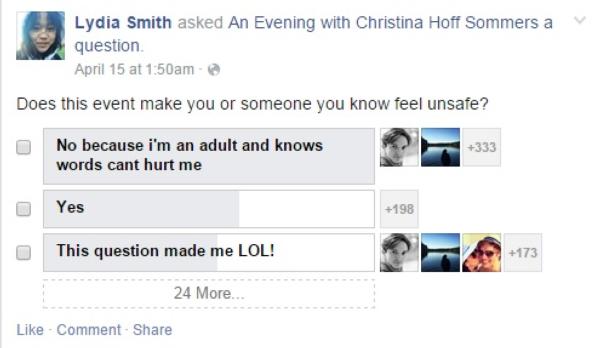 “I think that Oberlin College students have presented a lot of well-reasoned, factually-based arguments there (though they may have gotten lost in all the trolling from completely random people who somehow found our page),” Emilie Carr, an Oberlin student, told Campus Reform in an email. “Students aren't necessarily upset because she's speaking: though I don't necessarily think that she's the wisest choice of speaker or the best way for us to allocate our funds.”

Carr said that OCRL should have included some sort of disclaimer on the event in order to warn victims of sexual assault that Sommers’ talk could include something “triggering.”

“The intent of OCRL seems to have been to broaden discussion on campus, which is great and what Oberlin is all about,” she said. “But, by failing to disclose the fact that the speaker is a rape denialist, they could've created a really unsafe space for people who attended.”

Carr told Campus Reform that students do not so much want to cancel the event but would rather protest it.

The Student Bill of Rights also says that students can participate in protests, or demonstrations, as long as they “do not disrupt the operation of the college, endanger the safety of the individuals, or destroy property.”

“In any public demonstration, students are understood to speak only for themselves or for the student organizations they represent,” it states.

At time of publication, 217 people had RSVP’d to attend the event. Twenty people had responded “maybe.”

Allison Boyt, an Oberlin alumna, told Campus Reform in an email that she plans to attend Monday’s event as a former OCRL president.

“There has been a hugely negative online response to a Facebook event, in which many students are claiming that aspects of Ms. Sommers visit or her past stance on rape culture make them uncomfortable,” Boyt said. “Quite simply, the consensus from OCRLs is this: then don't attend! No one is mandating you enter a place where you might experience trauma.”

According to the ‘09 graduate, several students have decided to set up a “safe space” alternative during Sommers’ talk.

“I just hope they come to realize that there is no such thing as a ‘safe space’ in adult life such as what is available at the bubble that is Oberlin,” she said. “At 27-years-old, I now live and work in the arts community, where fiscally- and socially-conservative viewpoints are often treated with derision. It doesn't change my mind, and though it doesn't make me feel unsafe, it sometimes makes me feel unwelcome. But that's the cost of standing up and speaking out about something.”

“Personally, I fail to see how a lectureship series speaker can be causing harm to anyone on campus. As I reiterated to the Facebook commenters, we have had several events in past years that incited student dissent, and threatened to be shut down or censored in some way,” Boyt told Campus Reform.

“All of them came to pass, no one was harmed, and meaningful dialogue was encouraged. If students feel that their safety, mentality, or well-being is threatened by a professor's lecture from a podium, they have the freedom not to attend, just as she should have the freedom TO attend, and to speak. Misconstruing the invitation of a conservative lecturer to campus as a concerning event, or a lack of empathy for student viewpoints, is effectively censoring the side the liberal students don't want to hear. If they want open discourse, they have to let us have our say as well. If they want empathy, it sounds like the safe space would be a great place to find that.”

On Thursday, Georgetown University, a private institution in Washington, D.C., also hosted Sommers to give a talk entitled, “ What’s Right (and Badly Wrong) with Feminism?” Much like the students at Oberlin, female students decried Georgetown’s event, claiming the College Republicans need to include a “trigger warning.”

“TRIGGER WARNING: This event will contain a discussion of sexual assault and may contain comments that deny the experiences of survivors,” Nora West wrote on the public Facebook event page.

Students also taped handmade signs in front of the classroom that directed students to another room which was a “safe space,” in case they felt “triggered or upset by today’s events.”

“Trigger warning: this event will contain discussions of sexual assault and may deny the experiences of survivors,” read another note.

“Trigger warning: anti-feminism,” read a sign one female student held during the event. 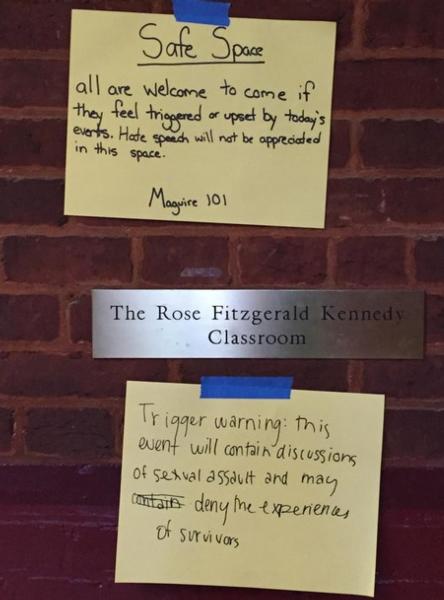 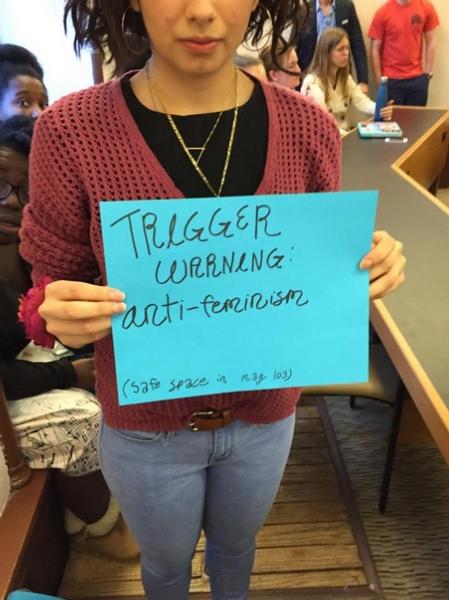 “I’m sorry to see that students want to silence another point of view. It seems that feminists can’t decide if women are warriors or if they are delicate butterflies who have to have established academics, like Dr. Sommers, remarks prejudged,” said Laurel Conrad, a lecture director for the Clare Boothe Luce Policy Institute (CBLPI), the conservative organization that helped bring Sommers to Georgetown’s campus for the event.

“The protesters are using trigger warnings as a way to stigmatize the presentation and anything that differs from their point of view,” Conrad told Campus Reform. “Liberals insist upon pushing their politically correct agenda on others and it’s insulting.”

More than 100 students attended the standing-room only event Thursday night. According to a CBLPI blog post, Sommers did not say anything that could be considered a “rape apology” during her speech.

In December, Oberlin students publicly attempted to shame their professors who would not drop finals for black students in the wake of the deaths of Michael Brown and Eric Garner, two black men whose deaths by police were widely pu. Last month, students at the Ohio college cancelled a performance by Canadian band Viet Cong as students felt the band’s name was “deeply offensive.”

Smith, Kronstadt, McFadden, and Berg did not respond to requests for comment from Campus Reform. Several other Oberlin students specifically declined to comment to Campus Reform for this article.