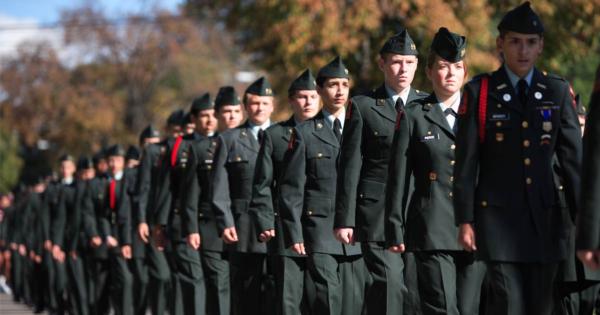 According to a thread on Reddit, cadets at ASU were required to participate in the nationwide “Walk a Mile in Her Shoes” campaign—described by organizers as an “international men’s march to stop rape, sexual assault and gender violence”—or face a negative counseling mark on their record. As participants, the cadets were asked to purchase and wear red high heels as a symbolic gesture to support of victims of sexual violence.

"So I just spent $16 on a pair of high heels that I have to spray paint red later on only to throw them in the trash after about 300 of us embarrass the U.S. Army tomorrow."

“So I just spent $16 on a pair of high heels that I have to spray paint red later on only to throw them in the trash after about 300 of us embarrass the U.S. Army tomorrow,” read a text message posted by one Reddit user.

Reddit users reacted quickly to the allegations of forced ROTC participation and criticized U.S. Army Maj. Gen. Peggy Combs for not condemning it.

“I just don’t understand why Combs would court political controversy like this,” Reddit user Has012 wrote. “Isn’t the military supposed to avoid faddish political movement and religious issues[?]”

Another user blamed the Obama Administration for turning the military into “a petri dish for social experimentation.”

Last April, Sgt. Aretha Garrett compared the “Walk a Mile in Her Shoes” event to the Army’s Sexual Harassment/Assault Response and Prevention Program (SHARP) and encouraged “maximum participation” in the men’s march.

“I thought that would be a good thing for the Army to participate in, being that we have the SHARP Program and the main goal is to get the word out on how to prevent sexual assault and sexual harassment, and know there are resources out there that can help regardless whether they are a Soldier or civilian," Garrett said at the time.

Despite the allegations of forced participation on Reddit, a video released by ASU’s State Press tells a different story. In the video, Maj. Michelle Bravo, a professor of military science at ASU, says the cadets “planned and decided what they would do” for the event and were not forced to purchase high heels.

According to the Washington Post, ROTC cadets at colleges nationwide were encouraged to participate in sexual assault awareness month in some capacity on their respective campuses. However, the U.S. Army Cadet Command plans to investigate the claims about forced participation.

“After receiving some comments about uniforms, we are currently reviewing how local universities implemented their participation in these events designed to raise awareness on the issue of sexual assault,” Lt. Col. Paul Haverstick told the Post in an email.