Mariana Barillas News Producer at Sinclair's The National Desk @mvbarillas on Jul 03, 2015 at 11:21 AM EDT 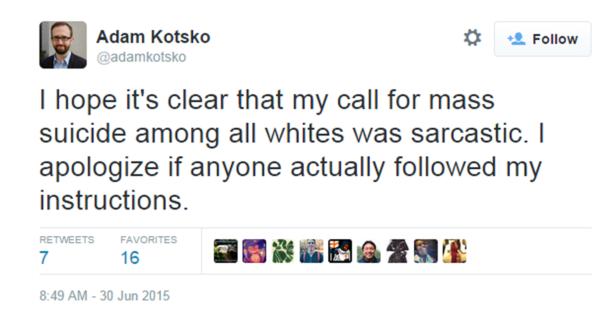 A college professor has issued an apology after jokingly claiming on Twitter that white people should commit “mass suicide” in response to guilt over slavery.

Adam Kotsko, an assistant humanities professor at Shimer College, proposed this collective action after claiming in a Twitter conversation that whites have “benefitted from slavery and are complicit in it."

"If you think I really support white mass suicide, you're an idiot and I hate you."

The comments were made during a time of heightened racial tensions, including the Charleston church shooting and subsequent controversy, a tragedy which he has described on his blog as a white-supremacist terrorist attack.

After he made what he described as a “sarcastic” comment and apologized “if anyone followed my instructions,” Kotsko responded to the intense social media backlash by tweeting parodies of headlines and commentary on the benefits of white mass suicide before resorting to personally insulting many of his critics, calling them a group of “ sad, pathetic people.”

In one exchange, Kotsko refused to offer specific solutions on addressing racial inequalities and called the questioner “ignorant.” He then stated that he would not give the “annoying” individual any “fodder to criticize and dismiss me any further.”

Kotsko took to his blog a few days after the initial tweet, arguing that “I do not hold that view, nor does anyone else in the entire damn world [emphasis in original].” He says that he found it “hilarious” that “so many people can’t detect the most obvious sarcasm in the history of sarcasm.”

He promoted the post on Twitter, writing that if “you really think I support white mass suicide, you’re an idiot and I hate you.”

“I was in dialogue with an obviously bad-faith interlocutor on the subject of race, who clearly wanted to bait me into saying something ‘offensive,’ and out of frustration, I decided I’d give them something to cry about and say something really ‘offensive’— scare quotes intended. My assumption was that the claim was so obviously hyperbolic that the sarcasm would be immediately evident,” wrote Kotsko in the blog post.

After explaining his intentions, Kotsko wrote another blog post in which he again argued that “every white person benefits to some degree from the differential treatment of blacks” and proposed a “social model of justice.”

As previously reported by Campus Reform, Kotsko attracted attention this January due to his tweets on the Charlie Hebdo attack in which he said he was unsurprised that the publishers of a “newspaper devoted to hate speech” had become victims of the terrorist attack. He retracted the comments and apologized, stating that he “found the whole thing upsetting.”