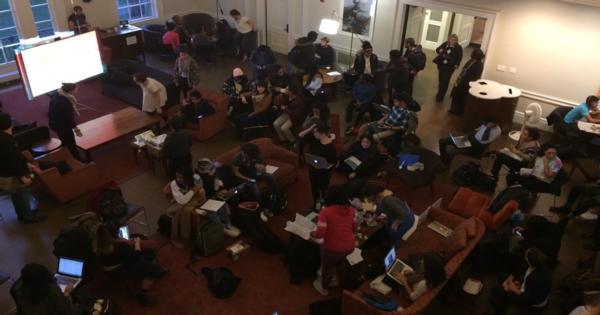 A mob of students descended upon Brown University President Christina Paxson’s office Thursday afternoon, demanding an end to the dialogue on racial issues.

“We are here today in Christina Paxson’s office hours because we do not have office hours with the corporation itself,” the students declared in unison, reading aloud from copies of a flyer. “We are here to voice the demands of people of color who have been silenced on Brown University’s campus or by the institution’s actions and whose voices are not explicitly represented in the Diversity Action and Inclusion Plan as it stands.”

“The burden has been placed on students of color to act as unpaid diversity consultants..."

Brown announced a draft of the Plan on November 23, but left it open to comments from faculty, staff, and students until December 4, with plans to revise the document and present a final version by the end of the semester.

Students billing themselves on Twitter as “#BrownTogether,” however, apparently felt that this was in some way insufficient, because not only does their statement to Paxson imply that commandeering her office space was the only recourse available to them, they did not even wait until the open comment period ended before holding their demonstration.

“The Diversity Action and Inclusion Plan is illegitimate and insufficient,” they asserted. “As a result of the arbitrary deadline of the feedback forum for the diversity action and inclusion plan closing on December 4, 2015, the administration has not acknowledged our countless and persistent demands to this institution.”

The students then explain that they intend to “hold the university accountable” for implementing their unspecified demands, saying “We are tired of open dialogues and forums, and we will not be tokenized and exploited in these conversations any further.”

They also, somewhat confusingly, state that part of their purpose is to “collect the feedback of students of color as we see fit,” which way apparently differs from the university’s open-ended solicitation of feedback, because they later complain that “the burden has been placed on students of color to act as unpaid diversity consultants … [and] therefore, we cannot trust the university to ‘build our future on the legacy of our first 250 years’ because it is building on oppression.”

Videos posted on Twitter indicate that Paxson refused to back down in response to the ambush, though she did offer to meet with them to discuss the matter further.

In one video taken in the doorway of her office, Paxson reiterates her support for arming campus police, eliciting muttering and scattered boos from the students.

Another clip shows her attempting to converse with the crowd of students filling her office and spilling out into the hallway, and eventually having to state with exasperation, “I’ll tell you the truth if you let me talk,” when they repeatedly interrupted her.

In a third video, also shot from inside Paxson’s office, she explains that she cannot stay and meet with the students any longer because she has another appointment, but offers to schedule additional talks during her office hours, prompting one student to question the importance of the other event compared to the group’s grievances.

“We also have obligations, like being in class,” a female student interjects. “But we can’t focus on those things when we have to focus on staying alive on campus.”

As of Tuesday afternoon, the sit-in appears to be ongoing, with pictures on Twitter depicting a group of students milling about in the lobby of the administration building.