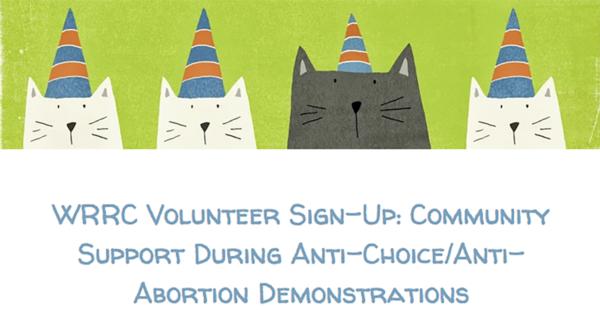 “We are calling for volunteers to help make signs, hold content warning information signs, [and] hand out Report Hate and Bias information cards,” the group wrote in an email later posted to Facebook.

“We are asking for volunteers to help provide support throughout the three days of demonstrations..."

In addition, WRRC volunteers were recruited to “provide umbrella escorts for community members” who did not want to stand in the sun while protesting.

According to the group’s Facebook page, the event was organized in collaboration “with the CRRC’s, including the LGBTQIARC and Center for Student Involvement.” Even though the Center for Student Involvement claims to “help groups operate successfully on campus and to support the education experience which organizations provide for student members,” it allegedly partnered exclusively with a pro-choice group rather than a pro-life group.

The group also posted a document to its Facebook page calling for “support during anti-choice/anti-abortion demonstrations.”

“We are asking for volunteers to help provide support throughout the three days of demonstrations to support the WRRC community,” the group said in its call for volunteers.

During the “three days of demonstrations,” Students for Life at UC Davis set up shop in a common area on campus where members distributed pro-life materials and polled students on whether or not later terms abortions should remain legal in California.

But counter-protesters were quick to disrupt the demonstration, throwing pro-life materials to the ground and even harassing some participants for taking pictures of the protest.

In a video obtained by Campus Reform, members of UC Davis Students for Life appear to be talking to a counter-protester who in turn pushes a stack of pro-life flyers to the ground and proceeds to walk away.

Although a campus police officer was monitoring the protests, no action was taken against the student.

The WRRC also made counselors available to pro-choice students attending the rally to offer “empathetic listening, support, and access to mind spa services.”

Campus Reform reached out to the WRRC to ask for comment on its counter-protest but no response was received by press time.