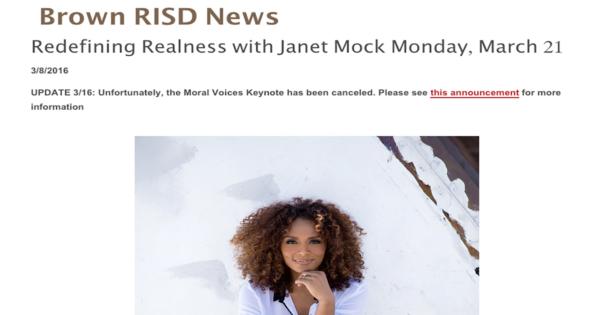 A group of Palestinian activists at Brown University protested a lecture hosted by the school’s Hillel House because it allegedly “defended and even advocated for the Israeli state’s policies of occupation and racial apartheid.”

The speaker, however, was set to be Janet Mock, an African-American trans woman and LGBT activist from Hawaii who planned on delivering a lecture entitled, “Redefining Realness” as part of a year-long lecture series on LGBT rights sponsored by a Jewish group known as “Moral Values.”

"[F]or decades, the state of Israel and Israeli advocacy organizations have been engaging in pinkwashing..."

The only problem, according to students who protested the event, was that a Jewish organization dared to host a lecture on equality when it is affiliated with a country that supports “colonialism, ethnic cleansing, and genocide of native Palestinians.”

“Hillel’s Moral Voices campaign has chosen the topic of LGBTQ rights this year,” students wrote in their petition of the event. “This hides the fact that for decades, the state of Israel and Israeli advocacy organizations (like Hillel) have been engaging in pinkwashing, a strategy that tries to improve Israel’s image and rebrand it as a liberal, modern, and ‘hip’ country.”

Instead, Brown students encouraged Mock to speak anywhere else on campus so long as it was not the Hillel House.

“We are not asking for students to boycott the event, but simply do not want Janet Mock’s invitation to Brown to be part of Hillel’s (and Israel’s) pinkwashing campaign. We therefore ask Janet Mock to accept Brown students’ sponsorship instead of Hillel’s,” protesters wrote in their petition.

But Mock decided to cancel the event altogether, saying the controversy leading up to the event distracted from her efforts.

“We feel the focus of Janet’s work was lost leading up to the proposed event, and her visit was received with controversy and resistance rather than open dialogue and discussion about the issues closest to Janet’s work in movements for trans liberation, racial justice and intersectional feminism,” Mock’s representative’s wrote in a statement.

Students circulated a counter-petition in response to the “blatant anti-Semitism” communicated by their peers.

“Accusations that all events organized by Jewish groups, even those with no Israel-related stances or affiliations (such as Moral Voices), are part of some nefarious Israeli propaganda machine echo familiar tropes of anti-Semitism,” the petition declared. “Also, it should be noted that even Hillel-affiliated groups that do advocate for Israel are careful to highlight a variety of perspectives, often bringing in both Palestinian and Jewish speakers who oppose Israeli government policies.”

Moral Voices, a Jewish group that has taken no official stance on the Israeli-Palestinian conflict but one that focuses its efforts almost exclusively on LGBT rights, also issued a response.

“We were shocked and deeply saddened to see a petition launched requesting that Ms. Mock reject Moral Voices’ invitation due to its affiliation with Brown RISD Hillel,” the authors stated before noting that the event was organized in collaboration with several other student groups on campus, including the Queer Alliance and the LGBTQ Center.

“We, the MV leadership, are neither equipped for nor invested in arguing the merits of Brown RISD Hillel’s Israel/Palestine-related programming,” they wrote. “This petition does, however, make us ask: given that Hillel is the center for Jewish life on this campus?—?with a mandate to support the interests and meet the needs of a very diverse constituency of Jewish students on College Hill—?does simply engaging in a Jewish space render one unfit to do justice work?”