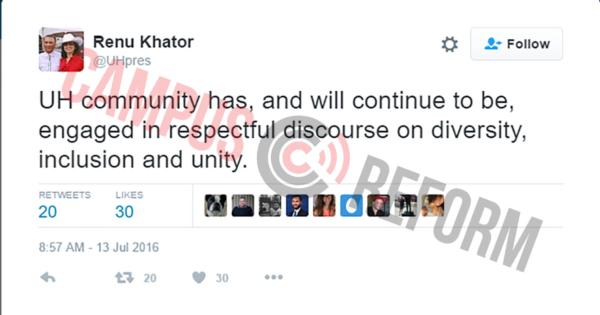 University of Houston (UH) students and guests spent five hours Wednesday debating whether or not to reinstate the student body vice president, who was suspended for criticizing the Black Lives Matter movement.

“The last three weeks scare me...Right now, this meeting is an exact example of what not to do.”

In response, the UH Student Senate voted last week to sanction Sethi, placing her on a 50-day suspension from office, requiring her to attend a three-day diversity training workshop and three multi-cultural events each month, and demanding that she write a letter of reflection to the Student Senate.

Under the terms of her punishment, Sethi will lose her office if she fails to comply.

At its latest meeting on Thursday, however, the Student Senate by students seeking to weigh in on whether the sanctions were justified and in accordance with Senate rules, according to the The Daily Cougar.

Some students remained in favor of the sanctions, claiming Sethi’s statements amounted to “institutional racism” and that the repercussions are justified.

“This isn’t just something that you slap somebody on the wrist for. We’re addressing systematic racism, institutional racism, and many other things,” asserted communications junior Destinie Holiday. “Why is it that it took this for you to recognize and hear our voices? Why is it that this had to go all over the news or become a hashtag for African Americans to be heard on this campus?”

Others, though, were clearly concerned about the free speech implications of Sethi’s punishment, and urged the Senate to repeal the bill outlining sanctions against her.

“Saying that I’m allowed to be physically and culturally diverse but being intellectually diverse is a no-go is the basis of every totalitarian government in history,” pointed out Matthew Wiltshire, a former student Justice who resigned last month over the controversy. “What you did during the last meeting was fundamentally wrong. I have lots of letters from people saying they are withdrawing donations to this University. I got one from a guy who donated $50,000 last year.”

Kadidja Koné, president of the Black Student Union, countered that the underlying issue was not free speech, but rather Sethi’s failure to represent certain members of the student body.

“The freedom of speech is not what is being questioned or punished,” Koné said. “The problem is: If you represent me, I expect you to understand my struggle, and I expect you to be correct.

“Do I believe that she’s a racist person? Absolutely not,” she conceded. “But do I believe she was an accurate representative of me when she put that post out? No. I gave her my vote. When you no longer can represent your student body, you should not be in office.”

Andrew Bahlmann, former Senate Chief of Staff, said the meeting was an “example of what not to do,” because of the disorder and confusion surrounding the viability of the sanctions and the attempts by some Senate members to nullify them.

“The last three weeks scare me,” Bahlmann said. “You’re an organization that has so much power. I’ve gone to every single meeting, and what I don’t see is a unit. I don’t see a team, and that scares me. Right now, this meeting is an exact example of what not to do.”

A former student body president also recognized the dysfunction of the Senate, stating, “this has been a rough month for this organization. Clearly this organization needs a little leadership.”

After five hours of debate and several attempts to throw out the sanctions, the Senate no longer had enough members left in the room to continue business, disappointing the overflow crowd of students, administrators, and guests who were eager to witness the outcome.

The Senate will hold another meeting next Wednesday, providing another opportunity for the body to reach a final resolution regarding Sethi’s sanctions.