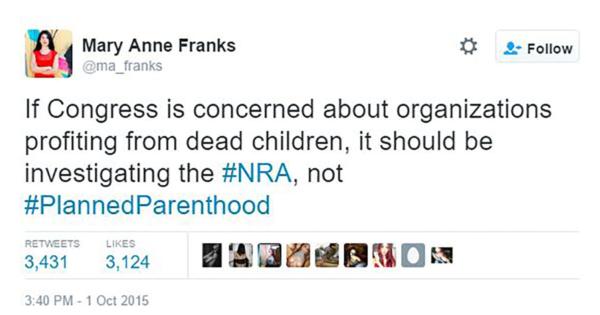 According to a University of Miami law professor, the U.S. Constitution is used to “justify irrational and destructive agendas.”

Mary Anne Franks, a law professor at the University of Miami, will be giving a lecture at Drake University Law School on September 15 to discuss the alleged similarities between “constitutional extremists” and religious extremists.

The lecture, titled “Guns, Speech, and Sex: The Rise of Constitutional Extremism,” claims there is an “obsessive focus” on the First and Second Amendments of the Constitution that leads to dangerous outcomes, according to a Drake University news release for the event.

“In recent years, the Constitution has become an article of faith in the worst possible sense,” Franks told the university. “It is increasingly invoked to justify irrational and destructive agendas in a way that strongly resembles the way religious extremists use the Bible to advance fundamentalist views.”

[RELATED: BOOK REVIEW: ‘The Closing of the Liberal Mind’]

Franks charges the Right with failing to protect the right to bear arms for the minority population, invoking the recent police shootings of armed black citizens.

“The Right's passionate defenders of the right to bear arms are notably silent when black men bearing arms are stopped, harassed, and killed by police and when women use firearms to defend themselves against domestic violence,” Franks said. "Such selective and self-interested appropriation does not honor either the text or the spirit of the Constitution.”

She added that this selective interpretation of the Second Amendment is used to stifle debate on gun control legislation, something for which she has criticized gun advocates in the past.

In one October tweet, which is pinned to the top of her page, she attempts to draw an analogy between Planned Parenthood and the NRA, suggesting that Congress should investigate the gun rights organization, rather than Planned Parenthood, for "profiting from dead children."

Yet Franks also believes that the “free speech fundamentalists” on the Left are equally harmful, pointing out that undiscerning support for free speech sometimes entails defending objectionable speech.

Mark Kende, director of the Constitutional Law Center at Drake, applauded the decision to invite Franks.