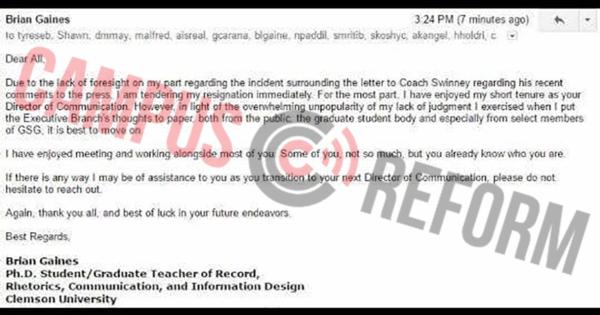 The director of communications for the Clemson University Graduate Student Government has resigned after accusing the school’s football coach of making racially divisive statements about Colin Kaepernick.

Brian Gaines announced his resignation Thursday afternoon, expressing regret for his “lack of foresight” and acknowledging “the overwhelming unpopularity of my lack of judgment.”

“You certainly don’t speak for me when you ask [Swinney] to apologize to this alumnus.”

The faux pas to which Gaines was referring involves a letter he wrote earlier in the day demanding that head football coach William Swinney apologize for statements he made to the press criticizing San Francisco 49ers quarterback Colin Kaepernick for using the pre-game national anthem to make a statement of protest.

“I think everybody has the right to express themselves in that regard. But I don't think it's good to be a distraction to the team, to use the team as the platform. I totally disagree with that,” Swinney told FOX Carolina. “I just think it creates more divisiveness, more division. I think there’s a better way.”

That “better way,” he later elaborated, would involve emulating Dr. Martin Luther King, Jr., because King relied on love, peace, and education to achieve his goals, rather than hate, violence, and ignorance.

Those comments apparently incensed Gaines, who proceeded to draft a letter to Swinney on GSG letterhead, but an inside source tells Campus Reform that Gaines sent the letter out on behalf of all GSG members without either soliciting or obtaining their consent. The original letter was signed by solely by Gaines, but before after he resigned, a second letter was released on behalf of the entire student government and sent out as a press release, even though the student government still had not formally voted on the matter. 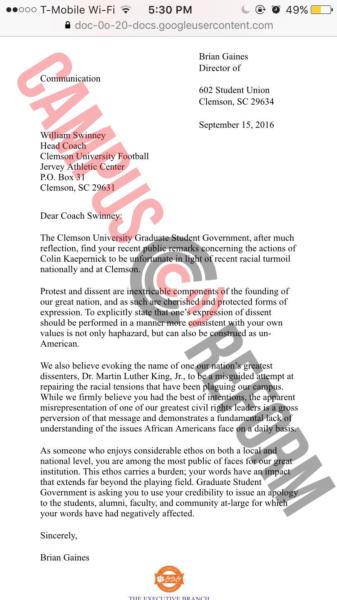 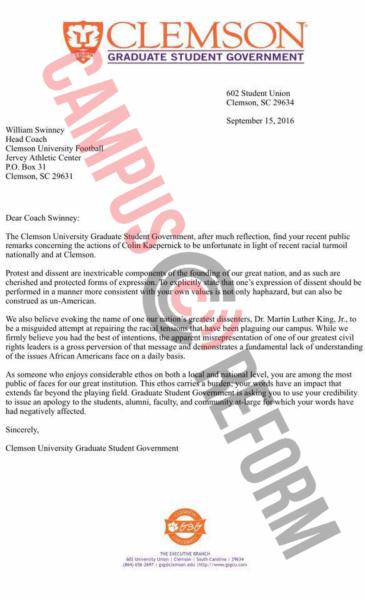 According to the source, who wishes not to be identified, even the Vice President of GSG remained unaware of the letter until it became public.

“The Clemson University Graduate Student Government, after much reflection, find[s] your recent public remarks concerning the actions of Colin Kaepernick to be unfortunate in light of recent racial turmoil nationally and at Clemson,” the letter begins. “To explicitly state that one’s expression of dissent should be performed in a manner more consistent with your own values is not only haphazard, but can also be construed as un-American.”

Gaines also condemns Swinney for invoking Dr. King in his remarks, calling it “a misguided attempt at repairing the racial tensions that have been plaguing our campus,” and adding that “the apparent misrepresentation of one of our greatest civil rights leaders is a gross perversion of that message and demonstrates a fundamental lack of understanding of the issues African Americans face on a daily basis.”

Gaines concludes by reminding Swinney that he functions as a very public face for the university, and asks him “to use your credibility to issue an apology to the students, alumni, faculty, and community-at-large for which [sic] your words have had [sic] negatively affected.”

The letter provoked a swift backlash, even prompting one alumnus to emphatically reject Gaines’ position on Twitter.

“I am an alumnus, I have given financially to Clemson University, I have served my country in uniform,” declares Jonathan Angner. “You certainly don’t speak for me when you ask [Swinney] to apologize to this alumnus.” 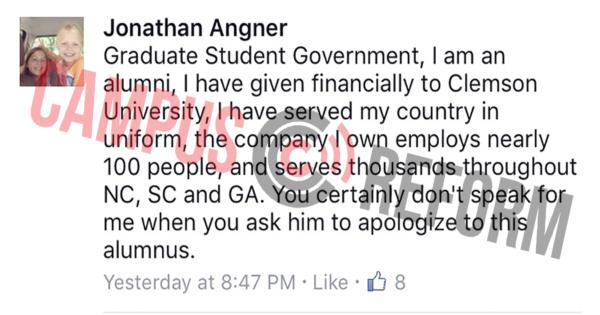 Despite rapidly succumbing to the pressure, Gaines did see fit to include a veiled parting shot at his former colleagues in his letter of resignation, remarking, “I have enjoyed meeting and working alongside most of you. Some of you, not so much, but you already know who you are.”

The day before Gaines sent the fateful letter, Clemson communications professor Chenjerai Kumanyika articulated a substantially similar argument in an op-ed for The Grio, in which he accuses Coach Swinney of trying to silence black student athletes’ protests.

Mitchell Gunter, a member of the campus free speech group WeRoar, then wrote an article responding to the professor, which has since gained significant traction and made members of the Clemson community aware of the attacks against Swinney within Clemson.