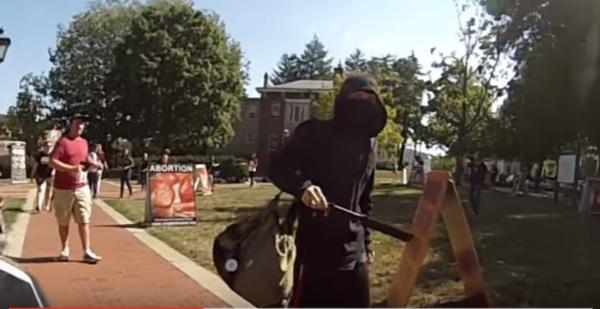 A masked abortion advocate attacked a student group’s pro-life display on Friday, battering their signs with a wooden club and appearing to threaten a pro-life activist.

Bobcats for Life, an Ohio University student group, constructed a pro-life display on campus with the help of Created Equal, an activist organization. The display consisted of multiple aborted fetus photos with accompanying factoids.

“This isn’t the first time that OU students have been harassed because of their conservative values.”

However, a video by Created Equal shows a masked assailant clubbing the display after it had been up for several hours.

A young man dressed all in black with a mask and a hood can be seen walking up to one of the display signs and whacking it with a wooden club. After the sign is knocked over, he moves to a second sign and hits that one several times as well.

The attacker starts to walk away after the camera operator tells him, “Sir you do not have a right to touch our equipment. Please back away from our equipment.”

Another pro-life activist approaches the hooded assailant, but the assailant holds up his club with two hands, as if warning the activist to stay away.

Jacob Hoback, president of Bobcats for Life, described the experience as “very scary,” noting that he was standing near the signs when the attack occurred.

“This is the first thing we’ve done that’s pro-life on campus, and it sets the tone now that we have to be scared or intimidated to express our free speech,” Hoback told Campus Reform.

According to Created Equal’s video description, the assailant “premeditated the attack by first mingling with his fellow abortion supporters” before donning his disguise.

“Suddenly he concealed his identity with a hood and mask and began swinging wildly at several of the abortion victim images,” the summary recounts. “After vandalizing the display, the masked hoodlum squared-off with a Created Equal staff member in a clear attempt to threaten him with violence if he attempted to apprehend him.”

Hoback said students have had a hard time expressing conservative beliefs in the past.

“This isn’t the first time that OU students have been harassed because of their conservative values,” he asserted. “I hope OU can work on becoming a more open campus to conservative beliefs.”

The assailant left the scene before he could be apprehended, but Created Equal says it has filed a report with OU Police. A spokesperson for the university told Campus Reform that the school is withholding comment while campus police investigate the matter.