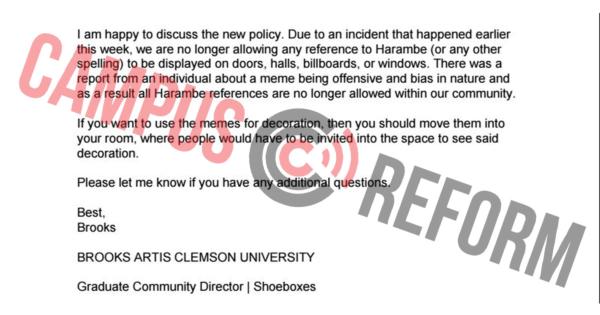 A Clemson administrator sent an email to Resident Advisors (RAs) Friday instructing them to demand that freshman remove all Harambe references from dorm hallways and windows.

The administrator claimed Harambe’s death has been used to “add to rape culture” and can be “form of racism.” An RA further added that any student who disobeys these instructions will be “in trouble.”

“All Harambe references are no longer allowed within our community."

“We are no longer allowing any reference to Harambe (or any other spelling) to be displayed on doors, halls, billboards, or windows,” the instructions state. “Harambe should not be displayed in a public place or a place that is viewed by the public.” 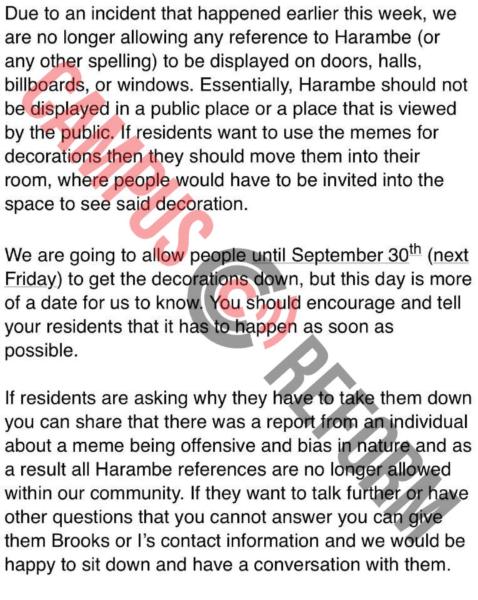 One Clemson freshmen leaked a screenshot to Campus Reform of an RA stating, "you cannot have any Harambe related thing up publicly after September 30th,” and threatening that point, “the individual/individuals will get in some trouble!"

The statement was released after an undisclosed malicious Harambe meme was directed towards a student, though the incident is only referenced obliquely in the message.

“If residents are asking why they have to take them down you can share that there was a report from an individual about a meme being offensive and bias [sic] in nature and as a result all Harambe references are no longer allowed within our community," the missive says, adding that further questions can be directed to residence hall administrators.

The only exception, Graduate Community Director Brooks Artis told one student, is that Harambe-related decorations will still be permitted inside of dorm rooms, “where people would have to be invited into the space to see said decoration.”

In a follow-up email responding to another student’s question, Artis explained that “although I (nor your RA) can share the incident that was reported [that] resulted resulted in this change, we have to remember that we all come different backgrounds and have different identities that shape how we are affected by different references.” 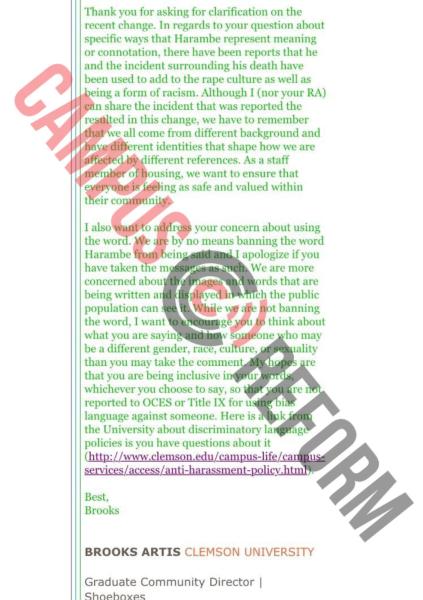 Artis even implied the threat of Title IX being used against those who display exterior-facing Harambe meme, saying, “my hopes are that you are being inclusive in your words, whichever you choose to say, so that you are not reported to OCES or Title IX for using bias [sic] language against someone."

However, Artis does claim that freshman will still be allowed to say the name “Harambe” without administrative punishment.

“While we are not banning the word, I want to encourage you to think about what you are saying and how someone who may be a different gender, race, culture, or sexuality than you may take the comment,” Artis writes.

Artis cites Clemson University’s discriminatory language policies as justification for the public Harambe meme-ban. However, these policies do not grant an RA or university administrator the authority to punish an entire group of students because of the wrongful actions of one individual.

Campus Reform reached out to Artis for comment, but only received a reiteration of her previous statements on the matter.