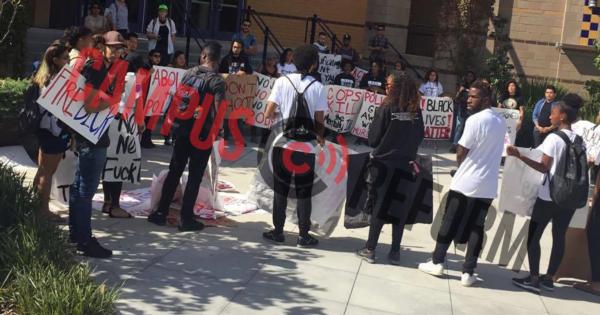 The University of California, Irvine Black Student Union held a protest Friday calling for a total and complete ban on the UC Irvine Police Department.

The protest was in response to UC Irvine’s “New Narratives” forum, where LAPD Chief Charlie Beck was leading a talk on police brutality and race. According to the website, the event is designed to “bring together leading scholars and innovative practitioners to define the problem, identify challenges, and discuss possible solutions to [police brutality.]”

“This protest was misguided and ignorant in every sense of the word.”

UC Irvine’s Black Student Union evidently wanted nothing to do with this.

Protesters held blood-spattered signs that said “Blue Lives Don’t Matter,” “Police Kill the Mentally Ill,” and “Fuck the Police.” In a video obtained by Campus Reform, protestors can be heard chanting “Rise up, resist, put those killer cops in jail, the whole damn system is guilty as hell,” as they marched around campus. 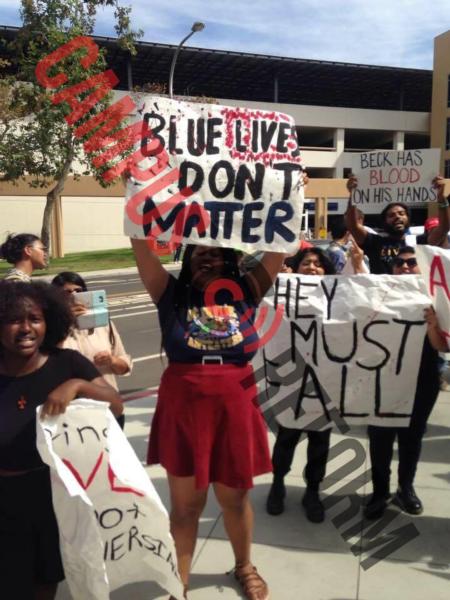 Additionally, Black Student Union activists called for their peers to sign a petition demanding that UC Irvine ban the campus police department. Protesters also called for the immediate firing of LAPD Chief Beck on the grounds of “police brutality.”

On the official event Facebook page, organizers even decided to sell official Black Student Union “Fuck the Police” shirts and sweatshirts to wear to the protest.

“This protest was misguided and ignorant in every sense of the word,” Robert Petrosyan, Chairman Emeritus of the UCI College Republicans, told Campus Reform. “The Black Student Union protested an event held in response to their own concern about police brutality, and provided a real opportunity for direct dialogue with the police. However, what this event demonstrated was that dialogue was not what they wanted.”

Petrosyan and others tried to engage members of the protest in a discussion about the issues, and were met only with “anger and hateful chants.”

“They openly advocate to ban the police at UC Irvine despite the fact that there was no case of police brutality on campus that they could point to, and they perpetuate myths of the Black Lives Matter movement that only lead to more trouble for those living in those neighborhoods,” Petrosyan continued. “Black Lives do matter, as do Blue Lives and all lives. And when people die as a result of riots, looting, or under-policing coming from the black lives matter movement, those lives matter too.”