Peter Van Voorhis Contributor at The Washington Examiner @RepublicanPeter on Nov 01, 2016 at 10:51 AM EDT 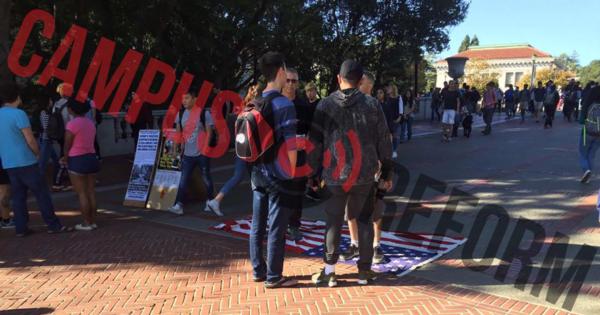 Communist protesters at the University of California, Berkeley staged a demonstration Wednesday railing against the “capitalist system” and “American imperialism” by encouraging students to stomp the American flag alongside them.

The protesters were a part of Berkeley’s “Revolution Bookstore,” a communist establishment near campus frequented by communist academics and students alike. The organization’s website details its goals of “an actual revolution for the emancipation of humanity” and sings the praises of Bob Avakian, the cult-like leader of the American Communist Party.

“To my surprise, even stepping on the American flag is too far for many Berkeley students.”

Students at UC Berkeley told Campus Reform that the group routinely comes on campus to step on the American flag and to convince students to join the communist revolution. Normally they wait outside the entrance, but this time, they pressed deep into campus in the hopes of getting a positive reaction from leftist students.

The communist “revolutionaries” chanted “America is committing genocide” and “we need a communist revolution,” according to witnesses at the scene, one of whom posted photographs of the demonstration on Facebook. 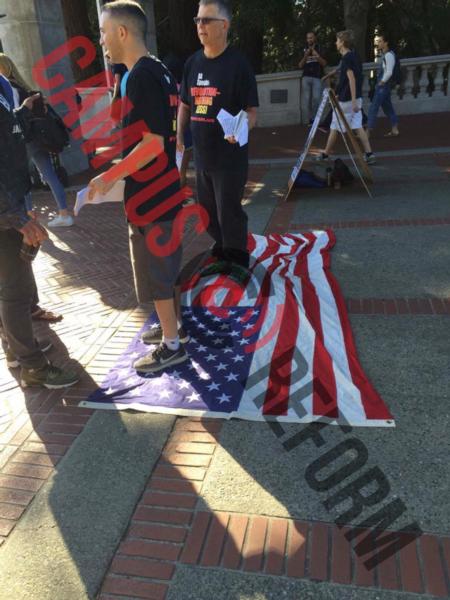 UC Berkeley is widely known for being one of the most liberal universities in the country, and made headlines last week when protesters violently blocked white students from using an on-campus bridge, but despite these aggressive leftist tactics, most students seemed unfazed by the communist message.

“They come a few times a week and usually encourage students to step on the flag as well—to my surprise, even stepping on the American flag is too far for many Berkeley students,” Naweed Tahmas, a member of the Berkeley College Republicans who witnessed the incident, told Campus Reform. “I’ve never seen a student ever accept their offer of stepping on the flag. For the most part, students were ignoring them.”

“I actually once went inside their bookstore to talk to them and learned that one of their greatest goals was to end freedom of speech. They said specifically shows like ‘Tosh.0’ should and would be banned because of ‘hate speech’ under their system,” Tahmas continued. “They also mentioned that under their ideal communist government, the government would fund and spread both pro-government propaganda and anti-government propaganda.

“As you can tell, they have set themselves with very odd goals,” he mused.