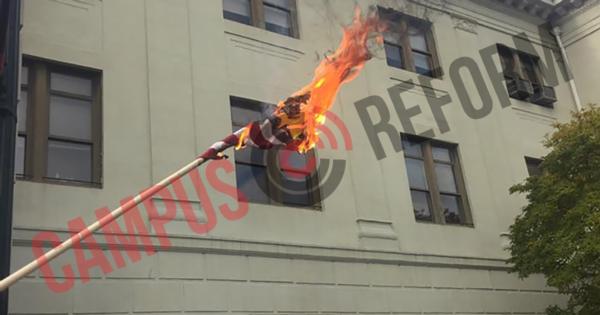 “Students at @AmericanU burning the American flag. I am LIVID.”

More than 100 students participated in the protest Wednesday, several of whom prominently torched American flags in front of the crowd while others chanted anti-Trump slogans.

[RELATED: 'Anxious and fearful' students demand day off to cry about Trump]

Anna F. shared a third video of the incident on Twitter, writing “Students at @AmericanU burning the American flag. I am LIVID.”

During the flag-burning, onlookers also participated in chants, including “Fuck Trump” and “Shut it Down.”

According to another video, a fight broke out after one student accused another of stealing their “personal property,” which appears to be one of the flags, triggering a brief scrum and several piercing shrieks.

The protest does not appear to be organized by any student group or university department.

"About 200 students convened this afternoon in a protest to express their reactions to the presidential election outcome.  The university supported the free expression of views on all sides of the political spectrum," a spokesperson for AU told Campus Reform. "The expressions were at times heated, but peaceful and safe. The university does not condone the burning of the American flag even though the act is protected speech."