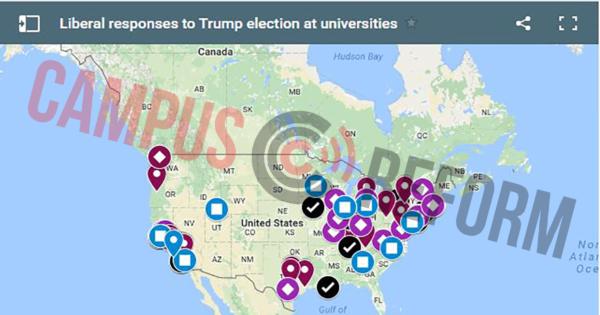 Within moments of the election being called for Donald Trump early Wednesday morning, college students across the country began a series of protests that picked up steam throughout the day and were still continuing, in some cases, as much as 36 hours later.

The following map, compiled from the many such incidents observed by Campus Reform, shows an unsurprising geographic distribution, with most of the anti-Trump reactions concentrated along the Pacific coast and in the major metropolitan areas East of the Mississippi River, while vast swathes of the nation have remained untouched by the dismay and outrage expressed by student protesters, faculty members, and even university presidents.

“Due to the emotional response by a large number [of] students...I have decided to cancel class.”

Student protests are marked with pins, schools with petitions to cancel classes are denoted by a black X, checkmarks indicate professors who cancelled classes, blue squares identify anti-Trump statements from presidents and administrators, and purple diamonds refer to schools that have offered students some form of safe space or counseling services to help them cope with the trauma of Trump's election.

Faculty members and administrators also got into the act, responding predictably with soothing assurances that they felt their students' pain, in the process providing rhetorical justification for continued outbursts.

Many professors, for instance,informed students that classes would be cancelled Wednesday in recognition that many of them would need a "mental health" day to "cope" with their "shock and outrage" over the result.

“Due to the emotional response by a large number [of] students as a result of last night’s election I have decided to cancel class and to postpone the quiz until Friday,” one professor wrote, noting that “this was a life-changing event” and perhaps “one of the most shocking events in our history.”

Perhaps inspired by the notion, students at several schools began circulating petitions calling on their presidents to cancel classes for the entire campus, saying, "We need a day to heal after we've been told the country doesn't value our existence at all," and asserting that“a Trump election directly endangers the lives of all students at Bryn Mawr College that are people of color, lgbtqa+, non-Christian, and female.”

In an effort to defuse the tensions and placate the more hysterical students, many universities began offering "safe spaces" and counseling services to help them deal with the "fear, anxiety, concern, questions, and confusion" they were feeling in the wake of Trump's unexpected victory.

Meanwhile, other professors were expressing their emotions more viscerally via social media, sputtering with impotent rage about the "uneducated whites" who made Trump's election possible, and lamenting that the result made them even more "terrified of white men" than they had been previously.