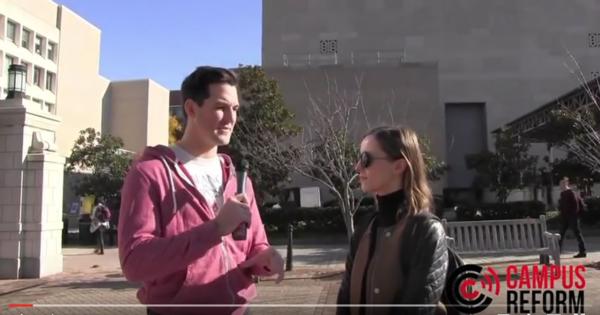 “It’s really important for students to feel safe while they’re going to school.”

To find out more about what motivates students to support the sanctuary campus movement, Campus Reform visited George Washington University, where many students participated in a pro-sanctuary walk-out several weeks ago.

The students interviewed were overwhelmingly in favor of GW becoming a sanctuary campus, calling it a “great thing,” and claiming that undocumented students “have a right to be going to this school” because “it’s really important for students to feel safe while they’re going to school.”

Since the GW students were asking their administration to ignore federal law, Campus Reform asked if they wanted the campus to be a “sanctuary” from other laws, as well.

“What about a sanctuary campus where student loan laws don’t affect you here?” Campus Reform asked.

“Oh, absolutely,” responded one student, while another agreed, saying, “Yes, that’d be cool.”

Students were also on board with making GW a sanctuary campus from underage drinking laws, because students “would feel safer” if they could drink and go to parties without breaking the law.

“I do agree with that one,” declared one student.

“Yeah, I think it [campus] should be a safe space for everybody,” replied another, explaining, “I don’t think anybody should be judged.”

Some students even went so far as to say that campus should be a safe space from final exams, given recent stress from the 2016 election.

“School’s been really stressful especially after the Trump election,” one student vented. “Like, it’s really hard to focus on your studies when there’s so much else going on.”

Throughout the day, Campus Reform spoke with just one student who refused to support the idea of ignoring federal laws on campus.

“I don’t believe in harboring criminals,” the student, who said he voted for Donald Trump, told Campus Reform. “I think, it’s against the law, we have to enforce federal law where it stands.”