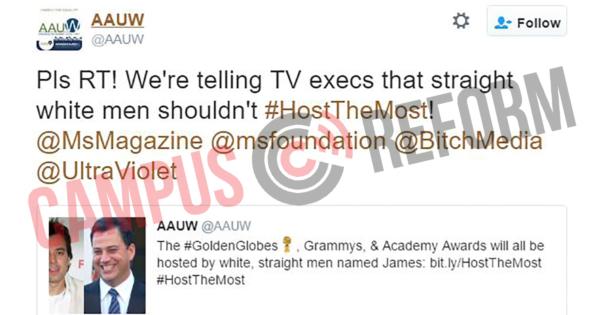 The American Association of University Women (AAUW) has started a campaign to complain about the “straight white men” hosting this year’s entertainment award shows.

Upset that “this year’s Golden Globes, Grammys, and Academy Awards will all be hosted by white, straight men named James (Jimmy Fallon, James Corden, and Jimmy Kimmel, respectively),” the organization is sponsoring a letter-writing campaign called “White Men Shouldn’t #HostTheMost” to help its supporters communicate their displeasure to Hollywood executives.

“Who gets to #HostTheMost? Across the board, it’s white, straight men.”

“Who gets to #HostTheMost? Across the board, it’s white, straight men,” the AAUW laments. “There’s no question that all three Jameses are plenty talented. Yet, time and again, white men dominate our TV screens.”

According to the group, “half the Golden Globe hosts...have been men” and “none have been people of color or openly LGBT,” while women have hosted just six Grammys since 1971 and 21 of the 82 Academy Awards shows, prompting the AAUW to proclaim that “this year’s picks continue the long tradition of women and minorities being shut out from entertainment’s biggest stages.”

Inspired by last year’s “#OscarsSoWhite” hashtag protesting the lack of non-white actors and actresses nominated for the highest honors, the #HostTheMost campaign aims to put pressure on the entertainment industry to make diversity a fundamental criterion in the selection of awards show hosts.

“This lack of diversity is a disappointing step back, especially coming on the heels of #OscarsSoWhite, which showed a high demand and consumer interest in equal representation for women and minorities,” the form email begins. “Picking these three hosts continues a long tradition of women and minorities being shut out from some of America’s biggest stages.”

Citing an AAUW report asserting that the lack of women in leadership positions perpetuates gender stereotypes that dissuade women from pursuing such roles, the letter concludes by demanding that the recipients “pick someone for your next awards show who better reflects the full diversity of America!”

The group is also promoting its #HostTheMost campaign on Twitter. 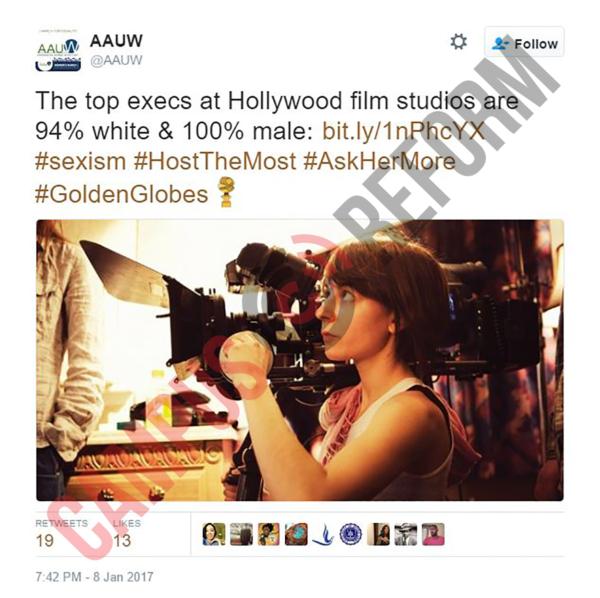 Nor is this the first time the AAUW has objected to the prominence of white males in the entertainment industry.

Last year, the organization addressed the lack of diversity among Oscar nominees in a post titled 5 Ways You Can Help Fix Hollywood’s Diversity Problem, which encourages readers to refuse to pay for movies that lack “empowering representations of women” and specifically calls on women to “join the online movement” by tweeting “#OscarsSoWhite.”

Indeed, the AAUW’s interest in awards show diversity extends at least as far back as 2011, when it selected recipients for its own “Women’s Oscars” as a contrast to “the typically testosterone-focused Academy Awards.”