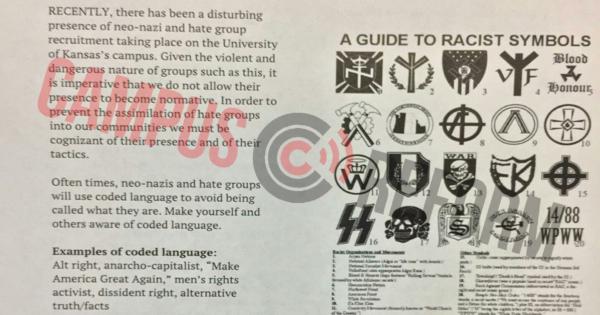 Flyers have appeared at the University of Kansas calling “Make America Great Again” and “anarcho-capitalist” examples of coded neo-nazi language and urging students to remove materials posted by “hate groups.”

The flyers, photos of which were obtained by Campus Reform, were found in a learning hall on campus with the title “Resist” and allege that hate groups have been recruiting students on campus and must be stopped.

“Opponents of safe-spaces [and] social justice...are opponents of liberation and equality for all people.”

“Recently, there has been a disturbing presence of neo-nazi and hate group recruitment taking place on the University of Kansas’s campus,” the flyer begins. “Given the violent and dangerous nature of groups such as this, it is imperative that we do not allow their presence to become normative.” 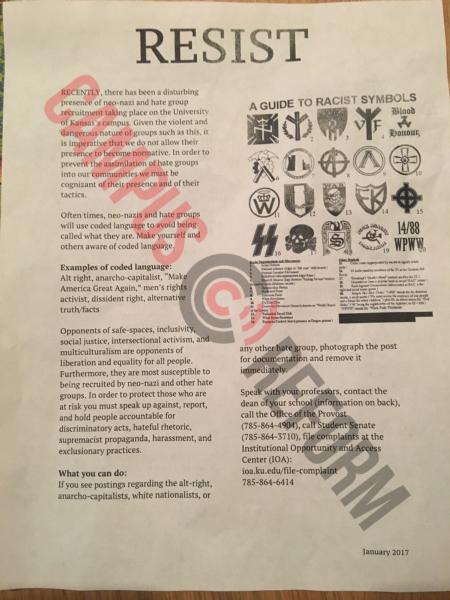 While the flyer does not specify which “hate groups” have been recruiting on campus, it does provide signs to look out for—specifically, the use of “coded language” that neo-nazis and hate groups allegedly use to “avoid being called what they are.”

In addition to keeping an eye out for coded language, the flyer says students should also “protest those who are at risk” of being recruited by hate groups, specifying that “opponents of safe-spaces, inclusivity, social justice, intersectional activism, and multiculturalism” are all considered to be “at risk” because they oppose “liberation and equality.”

Students are then instructed to tear down and report any postings from these alleged hate groups.

The backside of the flyer contains the phone numbers of all KU deans so that students can “demand action” such as “condemning neo-nazism and fascism on campus,” as well as numbers for Members of Congress students can contact to oppose Trump’s “dangerous and unqualified cabinet picks.”

“If you are neutral in situations of injustice, you have chosen the side of the oppressor,” the flyer concludes, using a quote by Desmond Tutu, before signing off with "Ase," a word meaning "the power to make things happen" in the Yoruba language of West Africa. 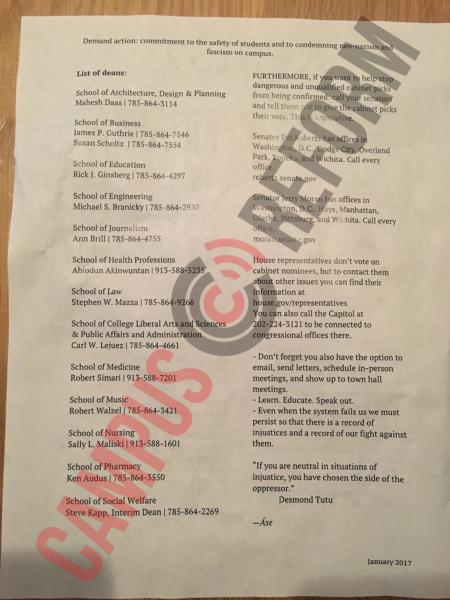 It is not clear who distributed the flyer, which does not bear any markings indicating official approval. Campus Reform reached out to the University of Kansas for comment, but did not receive a response by press time.