Dartmouth profs don hijabs, declare 'we are all Muslims now' 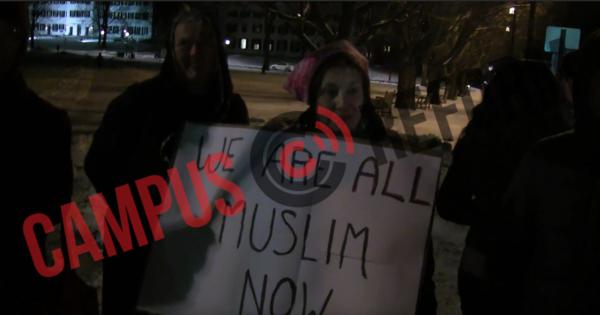 A student in the Tuck School of Business sent an email Tuesday to faculty members, staff, and students in the classes of 2017 and 2018 encouraging them to join an “expression of solidarity” with people affected by Trump’s executive order temporarily restricting immigration from seven countries.

“There is a demonstration planned...we’ll be hearing hijabs to show that we are all [M]uslims now.”

“As a community, we celebrate our diversity as fundamental to our ability to become wise leaders who will better the world of business,” the student wrote. “To affirm our commitment to our diverse student body, faculty, and staff, and our opposition to the immigration ban, we will be gathering with flags from all of the countries represented by our Tuck community in an expression of unity.” 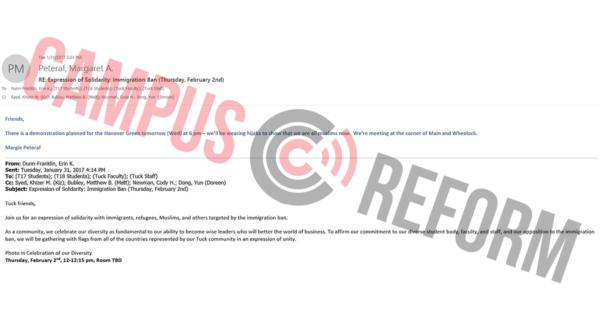 The email goes on to offer details for a “Photo in Celebration of our Diversity” on Thursday.

Margaret A. Peteraf, a professor in the Tuck School, replied to the email and invited the recipients to another protest taking place on Wednesday, encouraging them to wear hijabs because “we’re all Muslim now.”

“There is a demonstration planned for the Hanover Green tomorrow (Wed) at 6 pm — we’ll be hearing hijabs to show that we are all muslims now,” Peteraf declared.

Dartmouth’s IT policy does not expressly forbid using university resources for political information, but it does note that they are only permissible when “sent to a select few individuals and that pertain to professional and work related issues.”

Campus Reform reached out to Peteraf and the Tuck School of Business for comment but did not receive a response by press time.

Video footage of the demonstration provided to Campus Reform by The Dartmouth Review, shows that a small but committed group turned out Wednesday night, though only a few were wearing hijabs.

Others carried signs objecting to Trump’s stance on immigration, featuring slogans such as “Jew Against Trump/Seen this before, know how it ends;” “Stop Bannon/Preserve checks & balances;” and “We are all Muslim now.”