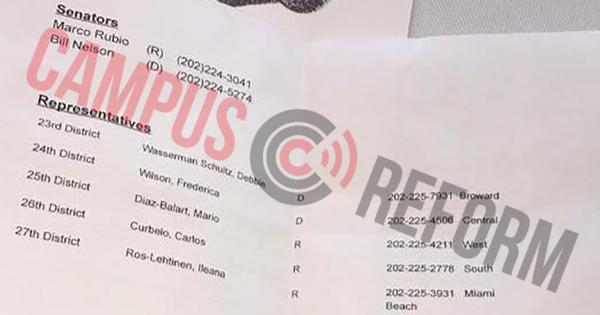 “I told her I support [repealing] Obamacare, and she said that Republicans don’t have a plan for replacement.”

During the “Spring Club Rush,” where student groups set up tables to recruit new members, representatives from SGA urged students to call their local officials and oppose any changes to the ACA, passing out “activism sheets” listing the phone numbers of local elected officials’ offices.

“A student government representative asked me if I had insurance. When I said I didn't have Obamacare, she tried to get me to sign up but told me the sheets were not for getting insurance but were instead for activism,” MDC College Republican Chair Marlon Montero told Campus Reform, noting that it took some effort to decline the offer.

“I told her that I support the repeal of ObamaCare, and she said that Republicans don’t have a plan for replacement,” Montero recounted. “When I told her about replacement plans such as the Patient CARE Act, she rolled her eyes and walked away.”

It is unclear whether or not the SGA took a formal vote about their stance on the Affordable Care Act, but the lobbying against President Trump’s executive order was carried out as an SGA activity.

Neither Miami Dade SGA nor school spokespersons responded to requests for comment from Campus Reform in time for publication.