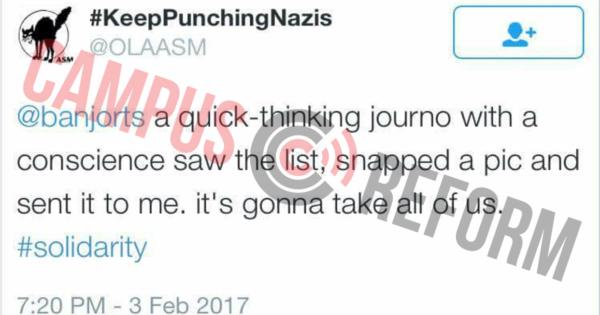 A group of anonymous bloggers known as “OLAASM” plans to publish the names and emails of Berkeley students who intended to join the College Republicans after Wednesday night’s riots.

In fact, in an email sent to the students in question by OLAASM, the anonymous “anti-fascist” group alerts prospective CR members that “it is in the public interest to know who supports this kind of thing,” with the unidentified messenger noting that he “fully plan[s] to publish the list of your names as attendees at the aforementioned campus event.”

“People who signed up on the sheet were contacted with these ominous and threatening emails.”

“You [are] all receiving this email because you provided your names and emails to the Berkeley CRs at the Milo Yiannopoulos event this week at UC, Berkeley and that sign-up list was leaked,” the email, obtained by Campus Reform, continues. “I’m currently writing a story about the event, the signup sheet, the College Republicans’ lack of security protocols, and your attendance at this questionable event promoting the hateful bigot, Yiannopoulos.”

The email goes on to solicit responses from the prospective CR members to a series of questions, the last of which asks whether they expect to face any “negative repercussions” for their participation in the conservative club.

“Are you worried that your attendance at this event—and the College Republicans’ lack of discretion/security with their email list—might have negative repercussions for you? For your athletic career? For your friendships? For your careers?” the anonymous blogger queries ominously. 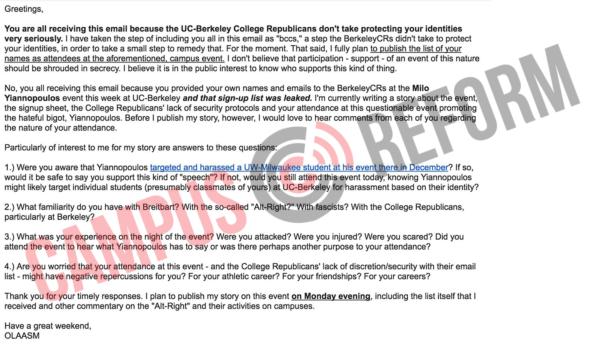 While OLAASM contests that the allegedly “leaked” sign-up sheet was due to a lack of “discretion” on behalf of the CRs, one member of the group explained to Campus Reform that it was actually snatched by an “antifa affiliate” in broad daylight.

“An antifa affiliate grabbed our sign-up sheet while tabling. We chased him down and were able to recover it, but he took a photo of it and biked away quickly,” Berkeley CR member Naweed Tahmas told Campus Reform, noting that “people who signed up on the sheet were contacted with these ominous and threatening emails.”

“The harassment and targeting has continued even after the Milo event. People who are not even members of the Berkeley College Republicans, and want to just hear a different viewpoint, are still being targeted by these left-wing radical groups,” Tahmas told Campus Reform.

Notably, OLAASM, which apparently stands for “Occupy Los Angeles Anti-Social Media,” refuses to disclose its identity, explaining on its website that it “eschew[s] authorship, believing it provokes ego and craving. 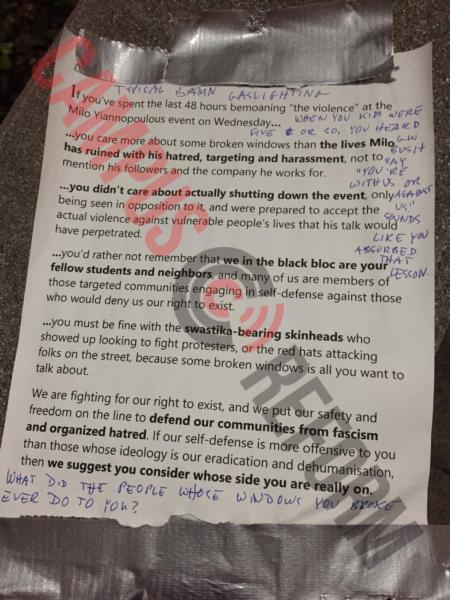 “We promote anonymity, collective decision-making, community and truth,” a description for the group planning to dox Berkley’s CR chapter suggests. “We have modeled this blog, tumblr, and twitter feed on the Black Bloc tactic—erasing identity and promoting solidarity—as a symbol against the corruption inherent within our movement, representing that of the wider world.”

Campus Reform reached out to OLAASM for comment, asking if it would be willing to disclose its identity as it is choosing to do with that of the CR members, but did not receive a response in time for publication.