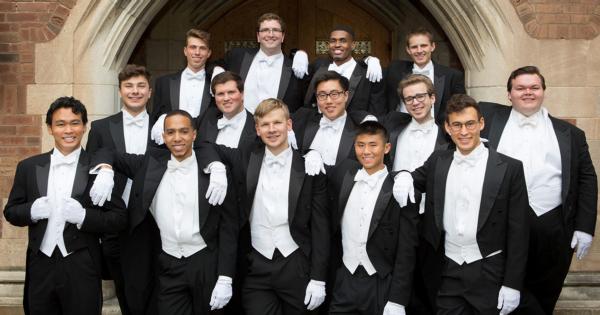 A group of female students at Yale University have started a petition demanding that the school’s all-male a cappella group accept women as members, even if it destroys the all-female complement.

Every year since 1909, 14 Yale seniors have been selected to join the Whiffenpoofs, and while the group has shown no inclination to revise its membership policies, several women were among those to audition for this year’s troupe, according to The Yale Daily News.

“It would probably destroy Whim ’n Rhythm, but I think I’m OK with that.”

“Privileged institutions like the Whiffenpoofs can afford to open their arms to singers on the basis of talent alone. They have enough power—historically and financially—to support a more inclusive environment,” the petition argues, acknowledging that while there are “more pressing issues facing our society right now,” the “core challenges” are “inclusion, community, and legacy.”

Despite concerns that such a change could effectively eradicate the school’s all-female a cappella club, Whim ‘n Rhythm, the petitioners are not backing down from their demands, saying that this is a battle that “we can and should win, for future generations.”

“Art-making is always a political act, regardless of intentions. And while a traditional route is often sustainable, for the group to evolve you must challenge assumptions about what it means to be a Whiffenpoof,” the petition suggests, though others disagree with the motives of the petition.

“Integrating the Whiffenpoofs discredits the work that women put in everyday to make Whim the best group it can be and dismisses the idea that there is value in single-sex organizations,” Zoya Afridi, a member of Whim’ n Rhythm, told the Daily News.

Other students seem to be fully on-board with the proposal, regardless of the potential setbacks, but only one Whim member is among the more than 100 signatories to the petition.

“It is one of the most blatant leftover forms of sexism I see at Yale, so when I saw my favorite female friends in a cappella championing the petition, I signed it right away because I want them to have the option of getting a Whiff year too,” stated one signatory whose comments have since been removed from the Daily News article because the student publication was apparently “unauthorized” to use them.

“It would probably destroy Whim ’n Rhythm, but I think I’m OK with that,” the student added unequivocally.

The petition, which is addressed to the current Whiffenpoofs class, echoes that sentiment, calling the group an example of “archaic structures of power” that must be dismantled.

“We ask you to consider the message you want to send to the campus and to your group’s global audience. You have only this one chance to make a choice, and take a stand; tomorrow someone else will decide,” the petition concludes. “You have this chance to make the Whiffenpoofs a voice that expresses and magnifies the talent of the entire Yale community. You have a chance to dismantle these archaic structures of power based on bodies alone.”

Nonetheless, Yale Glee Club member Claire Carroll, who drafted the petition, conceded that the effort was unlikely to have an immediate impact, noting that the Whiffenpoofs have already voted to remain an all-male group for the 2017-2018 school year.