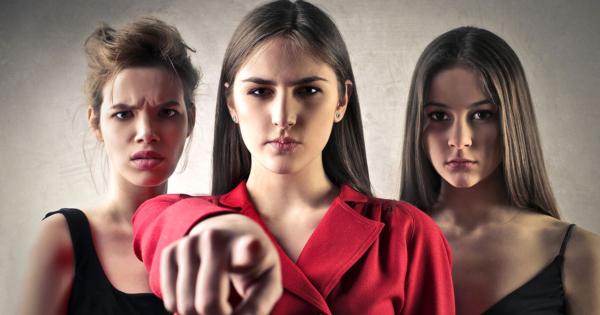 University of Virginia students are claiming that a classmate is ‘unsuited’ to serve as Student Council president because of her support for Donald Trump.

In a letter addressed to the university community, “Concerned Students at UVA” urged students not to vote for Student Council presidential candidate Kelsey Kilgore because she “maintains views that are detrimental to the interests of minority students,” referring primarily to her support of President Trump.

"Kilgore has been...disturbingly silent on the status of students endangered by the Trump presidency."

According to several anonymous UVA students, the letters were distributed and plastered throughout the university grounds early this week. Concerned Students attacked Kilgore for her “overt political leanings,” claiming she is unqualified to represent the student body.

“She has expressed her unapologetic support for President Donald Trump, as well as for ‘alt-right’ provocateur Tomi Lahren,” the letter reads. “This political stance is not inherently disqualifying; however, the Student Council President must represent the entire UVA community.”

The letter goes on to assert that Kilgore has failed to adequately address her support for Trump and how his policies put marginalized communities “personally at risk.”

“So far, she has provided no explanation or qualification to her politics despite how her overt political leanings directly threaten progress that has been made by both students and administrators at UVA,” Concerned Students declare. "Kilgore has been deafeningly and disturbingly silent on the status of students endangered by the Trump presidency." 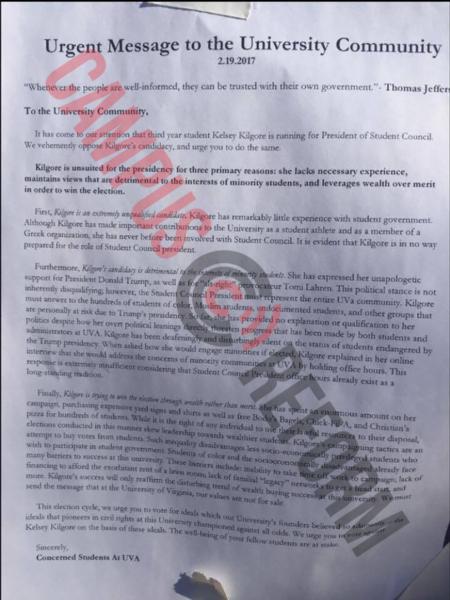 The letter also criticizes Kilgore for her lack of formal experience in student government and her campaign spending tactics, which her detractors call "an attempt to buy votes from students," but the section attacking her politics was the longest and most comprehensive paragraph.

A photo of the full letter was posted by the College Republicans at UVA, with an accompanying message stating that “We are very disappointed (yet not surprised) that some of our peers seem to believe being a Republican is a demerit equivalent to inexperience and questionable campaign financing.”

The group also quoted one of its members, Ryan Wilson, who deemed it “truly unbelievable that we've reached a point where private support for the President of the United States is somehow made out to be a disqualifying view in a student election."

Campus Reform reached out to Kilgore for comment, but she was unavailable due to Student Council voting taking place this week.