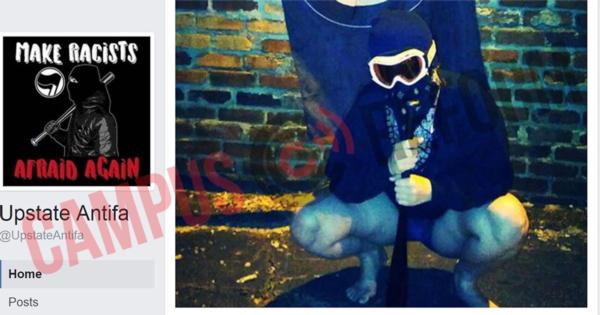 Posters promoting violence against “fascism” and advertising a group called “Upstate Antifa” were found littered across Clemson University’s campus over the weekend.

The posters, all of which were displayed in violation of the university’s posting policy, feature imagery of a fist punching a swastika and the phrase, “Fighting fascism is a social duty, not an antisocial crime.”

“It’s a call for violence against Trump supporters or people who disagree with them.”

There were at least four sightings of the posters throughout campus, including a residence hall elevator. Days earlier, similar posters were spotted on a park bench outside Fort Hill Presbyterian Church featuring the same imagery and stating, “Fascism is not to be debated. It is to be smashed.” 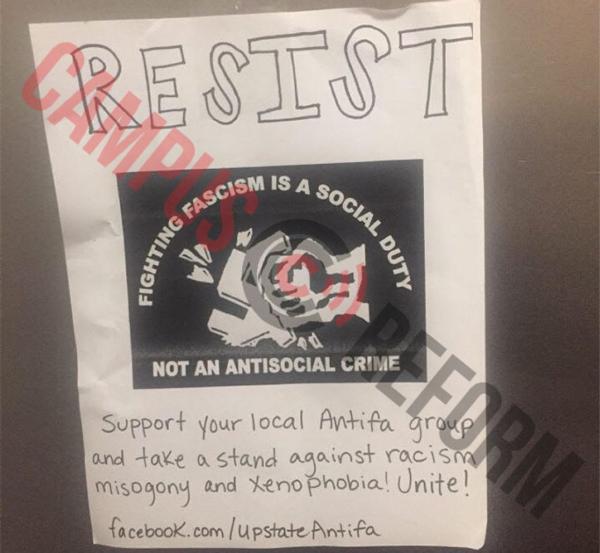 Alexander Cullen, a Clemson student, took a picture of someone wearing all black, whom he believed to be a member of Upstate Antifa, and posting the fliers the next morning.

“I was walking toward the library when I saw him standing next to the flier,” Cullen told Campus Reform. “He took a call and asked, ‘What’s the plan?’ I pulled my phone out and took the picture. He saw me and left.” 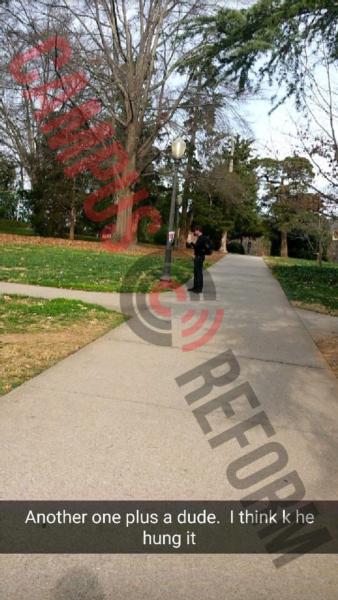 A link to the group’s Facebook page was included at the bottom of each poster, which features a profile picture depicting an Antifascist (Antifa) figure, clad in black and armed with a baseball bat. Surrounding the figure are the words, “Make Racists Afraid Again,” a clear play on President Trump’s campaign slogan.

Upstate Antifa’s description states that the purpose of the group is, “Fighting against fascism, racism, misogyny, and bigotry in Upstate SC,” and imagery sprinkled throughout the page suggests they mean to be taken literally.

One picture shows a masked individual squatting in front of an “Antifascist Action flag” while ominously wielding a baseball bat and, curiously, lacking pants. The caption reads, “This squat kills fascists,” with several punching fists.

Another picture with the caption, “them: what do you wanna do this weekend? me: the same thing I want to do every weekend,” showcases the actor Brad Pitt in a scene from “Inglorious Basterds,” wielding a bowie knife.

The group makes clear that shutting down the free speech of “fascists” is a reasonable justification for destruction of property, as well.

“Dialogue is for reasonable people acting in good faith. Dialogue is between two acceptable positions,” one post states. “The other side in this argument are lying f*cks who can twist any piece of information into a swastika-shaped balloon animal if you engage them in good faith.”

“Might as well punch a Nazi,” the post concludes, while other posts declare that “Antifas want Nazis dead.”

“NEVER let them convince you that broken glass or property is violence,” another picture proclaims, adding, “Property can be replaced, human lives CANNOT.” 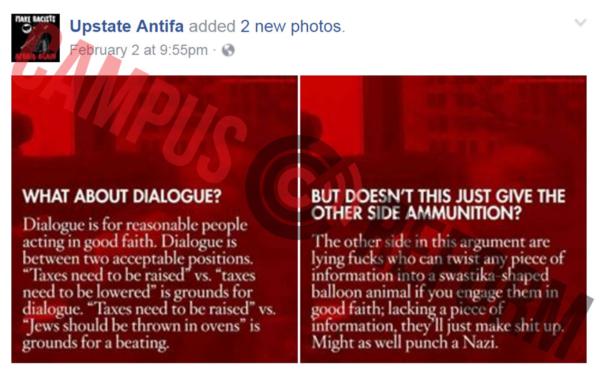 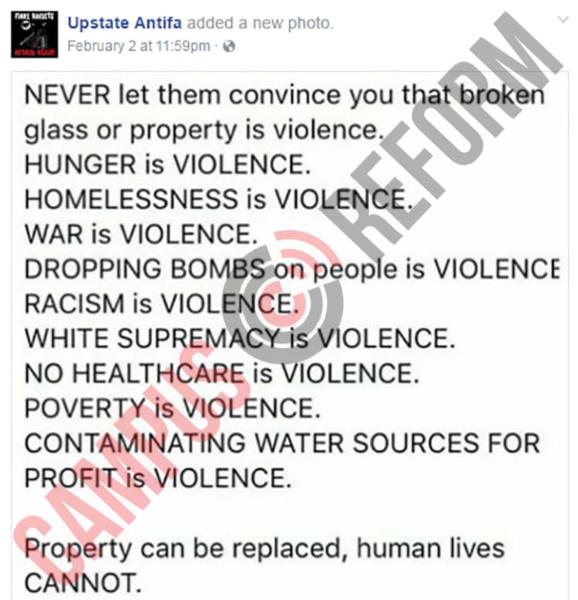 “Property destruction charges don’t look good on a resume or in a campaign for city council, but perhaps this is a good thing,” a shared essay states. “It means that political vandalism is usually a selfless act.”

Clemson student Jack Timmerman said he finds the group’s rhetoric concerning, noting that the label “Nazi” is thrown around rather casually.

“It’s a call for violence against Trump supporters or people who disagree with them,” he told Campus Reform. “They will try to say it’s Nazis, but that’s just them justifying being violent towards people with different opinions.”

“I think that Antifa only promotes the social divide they wish to mend,” added Ryan Nelson, a Clemson student and Air Force veteran.

“It makes me scared that somebody’s gonna knock me out if I wear a Trump shirt or say anything,” revealed another Clemson student, who wishes to remain anonymous. “I think they are acting like the Nazis before they came to power, and their calls for violence make me afraid.”

Upstate Antifa’s upcoming event, “Not My President: March against Fascism & White Supremacy,” will take place March 4 to “counter” a pro-Trump rally planned for the same day at the State Capitol Building.

“Since white supremacists and fascists have been emboldened by the current administration, they will be present,” the event description warns participants, but urges them to “Join the resistance and refuse to give these scum a platform.”