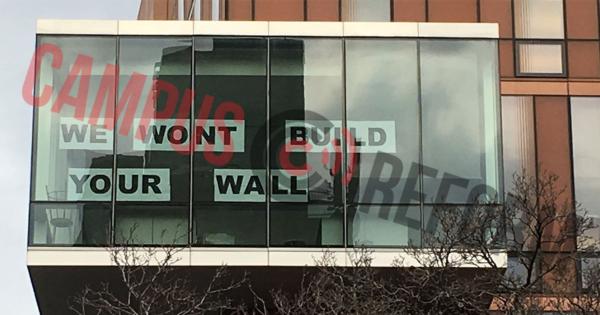 Students at Barnard College have posted a large sign saying “We Won’t Build Your Wall” on the facade of the Student Center following the inauguration of President Trump.

Despite potentially violating the Barnard College posting policy, the signage—which multiple professors and administrators told Campus Reform is a student initiative— has been permitted to stay up since at least February 1.

“Similar signs have been posted by architecture students throughout the city and around the nation.”

Karen Fairbanks, a professor at the Columbia + Barnard Architecture Department, which is housed inside the Barnard College Student Center, confirmed that the sign was “installed by students” and forwarded a media inquiry to them.

Those students did not respond to a request for comment.

The sign has been permitted to stay up despite being a potential violation of the Barnard College posting policy, which outlines that posters “may be posted only on designated bulletin boards…and shall not be larger than 11"x17.”

During election campaign years, 501(c)(3) organizations are prohibited from making statements which “[express] approval or disapproval for one or more candidates’ positions and/or actions” on an issue,” according to IRS policy.

The sign is similar in style to other signs seen at Yale University, Columbia University and Rice University—all of which appear to have since been taken down.