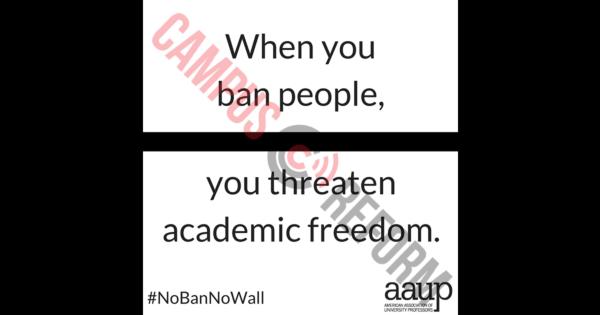 The American Association of University Professors has once again come out in opposition to President Trump, calling his revised immigration order “still a ban” and “still exclusionary.”

In a statement released Monday, shortly after the Trump administration issued its revised executive order on immigration, the AAUP condemned the move as having “a chilling effect on academic freedom and the movement of people and ideas.”

“When you ban people, you threaten academic freedom.”

“Those being excluded from the U.S. will doubtless include faculty and students who seek to travel here to speak, participate in conferences, or conduct other academic work,” the statement elaborates, calling the alleged “exclusion” of such academics as “at odds with fundamental AAUP principles and with [the] nation’s historic commitment to the free exchange of ideas.”

The statement goes on to vow that the AAUP will “join the legal fight that will follow this ban,” citing its “long history of legal action in this arena,” which includes a 2006 case in which scholar Tariq Ramadan had his visa revoked after accepting a tenured position at Notre Dame, allegedly “on the basis of what is known as the ideological exclusion provision of the USA Patriot Act.”

The AAUP also joined the ACLU that same year to represent Adam Habib, a scholar who was traveling to meet with associates at Columbia University when he was “intercepted at the airport” under another provision in the USA Patriot Act that excluded travelers who have “engaged in a terrorist activity.”

“Academic freedom eventually prevailed in those cases—the bans on entry for both men were lifted in 2010—and it will prevail again, though the fight will not be quick or easy,” the statement concludes, encouraging those who wish to “support the fight” to make a donation to the AUUP Foundation’s Legal Defense Fund.

Meanwhile, the academic organization is encouraging professors to express their opposition to the order by downloading a sign “to post on [their] office door or in [their] classroom” declaring that “when you ban people, you threaten academic freedom.”

Notably, the AAUP has come out against the Trump administration repeatedly since his election, opposing several of his cabinet nominees, including Jess Sessions—whom it criticized as “unfit for the job”—and Betsy DeVos,whom it rejected for her “lack of qualifications and hostility to public education.”

What’s more, in a statement published the morning after election night, AAUP President Rudy Fichtenbaum acknowledged that her nonprofit has “never endorsed or supported a candidate for president of the United States,” but then denounced Trump’s election as “the greatest threat to academic freedom since the McCarthy period.”

“Certainly, Trump’s Campaign has already threatened academic freedom,” her statement continued. “Trump’s denial of climate change and, indeed, of the validity of science itself assaults the very core of higher education’s search for knowledge.”

Notably, despite its nonprofit status, the AAUP has issued at least eight Trump-related statements since the election, out of 15 statements in total over the same period, meaning 53 percent of the academic organization’s public statements have been politically charged.