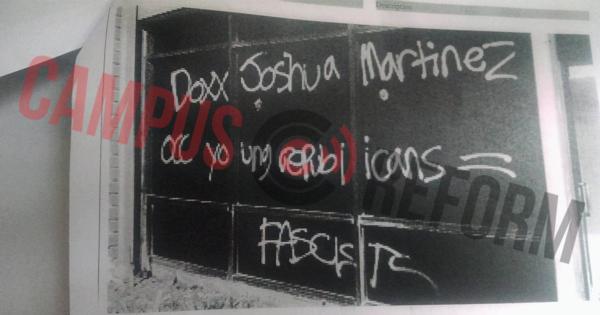 Joshua Recalde-Martinez, Chairman Emeritus of the Orange Coast College Republicans, was targeted by graffiti on campus Monday calling him a “fascist.”

The vandals targeted five different buildings on campus, with messages like, “Fuck Joshua Martinez” and others calling to “doxx” Recalde-Martinez and the OCC College Republicans.

“The incident was obviously caused by the fact that I am a conservative.”

After filing a police report against the perpetrator, Campus Police closed the investigation and stated that they could not positively identify the individual who made the threats on campus.

Recalde-Martinez told Campus Reform that he was “physically shaken” over the incident, and was concerned for the safety of himself and his family on campus. “I wasn't so much afraid for myself but for my mom and sister, because my mother works there and my sister works and attends the college.” 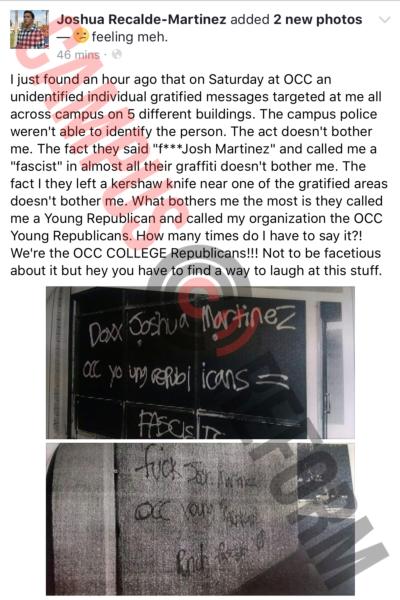 Recalde-Martinez, who defended Caleb O’Neil after he was suspended for referring to Trump’s election as an, “act of terrorism,” also recently received death threats for his conservative views.

“It's surprising to me that even with the graffiti occurring on five different buildings throughout campus, the perpetrator couldn't be caught or identified,” Recalde-Martinez told Campus Reform. “The incident was obviously caused by the fact that I am a conservative from what I can tell by what was sprayed across the campus.”

“I don't believe any conservative, or even any liberal, should face violence simply for their political or ideological beliefs,” Recalde-Martinez concluded. “It's sad our society no longer values civil debate and discourse.”

Campus Reform has reached out to Orange Coast College and is awaiting comment.