Prof excuses black student from lecture on slavery and race 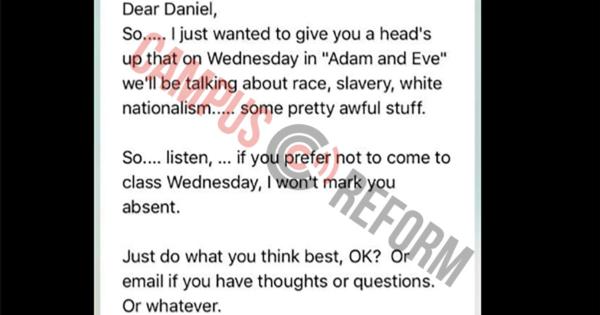 A Georgetown University professor is allowing a black student to skip her class because she suspects he may be uncomfortable with conversations on slavery and white nationalism.

In an email obtained by Campus Reform, Theresa Sanders, a theology professor at Georgetown, told a student in her “Adam and Eve” course that she would not mark him absent if he chose not to show up for a class talking about “awful stuff.”

[RELATED: Profs cancel classes to ‘cope’ with ‘anxiety and terror’ of Trump win]

“So… I just wanted to give you a head's [sic] up that on Wednesday in ‘Adam and Eve’ we’ll be talking about race, slavery, white nationalism… some pretty awful stuff,” the email began. “So...listen, ... if you prefer not to come to class Wednesday, I won’t mark you absent.”

Sanders then told the student that he could “email if [he] ha[s] thoughts or questions,” concluding with, “Just do what you think best, OK?” 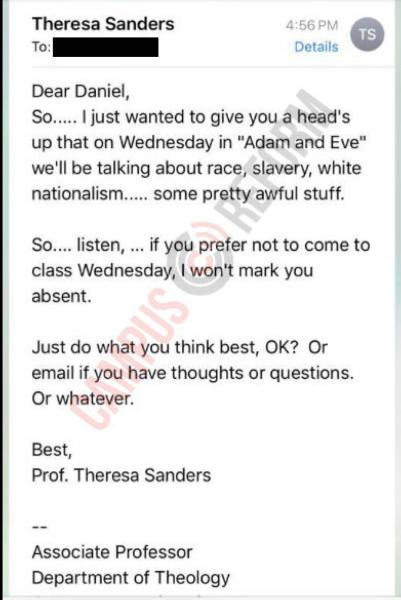 The student, seemingly pleased with Sanders’ accommodation, posted a screenshot of the email on his Facebook with the caption “We need more professors like this.”

Students commented on his status applauding the professor, writing “I LOVE PROF SANDERS SHE’S AMAZING” and “I was just about to tag you in this to say how much I love Prof Sanders.”

Campus Reform reached out to Sanders for comment and did not receive a response, but the student’s Facebook post was removed shortly after Campus Reform’s inquiry.

Campus Reform also reached out to Georgetown University for comment and did not receive a response by press time.