Student has grade docked for using 'mankind' in English paper 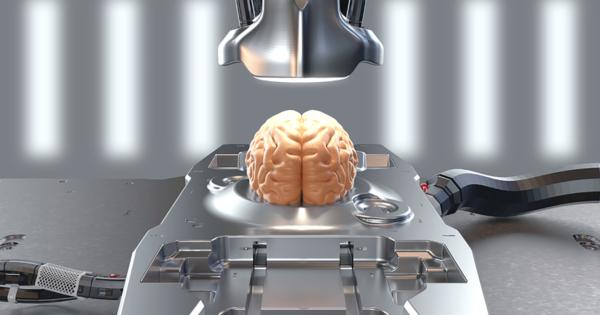 A Northern Arizona University student lost credit on an English paper for using the word “mankind" instead of a gender-neutral alternative.

Cailin Jeffers, an English major at NAU, told Campus Reform that she received an email from one of her professors, Dr. Anne Scott, informing her that she had been docked one point out of a possible 50 on a recent paper for “problems with diction (word choice)” related to her use of the word “mankind” as a synonym for “humanity.”

“The words we use matter very much, or else teachers would not be making an issue of this at all.”

[RELATED: Bethel faculty: Bible compels us to use inclusive language]

“I would be negligent, as a professor who is running a class about the human condition and the assumptions we make about being ‘human,’ if I did not also raise this issue of gendered language and ask my students to respect the need for gender-neutral language,” Scott explained. “The words we use matter very much, or else teachers would not be making an issue of this at all, and the MLA would not be making recommendations for gender-neutral language at the national level.”

Scott then offered to let Jeffers revise the paper to earn additional points in five categories, including diction, but noted that she is under no obligation to do so.

“I will respect your choice to leave your diction choices ‘as is’ and to make whatever political and linguistic statement you want to make by doing so,” the professor wrote. “By the same token, I will still need to subtract a point because your choice will not be made in the letter or spirit of this particular class, which is all about having you and other students looking beneath your assumptions and understanding that ‘mankind’ does not mean ‘all people’ to all people. It positively does not.” 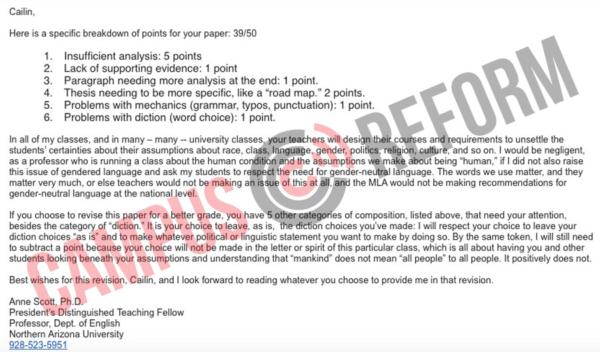 “After our first essay we were given a list of ‘do’s and don’ts’ based off of errors my professor found in our essays. Most of them make sense, just things like ‘make sure you’re numbering your pages’ and ‘cite in proper MLA format,’ but she said we had to be sure to use ‘gender-neutral language,’” Jeffers told Campus Reform. “Included with this rule were several examples of what was and wasn’t okay to use. In one of these examples she stated that we could not use the word ‘mankind.’ Instead, we should use ‘humankind.’ I thought this was absurd, and I wasn’t sure if she was serious.”

Jeffers decided to test the policy on her next paper by including two instances of the word “mankind,” and when the paper came back with the requisite points taken off, she requested a meeting with Scott.

“I stated that I agree with everything she said about my paper except my use of ‘mankind.’ She proceeded to tell me that the NAU English department, as well as the Modern Language Association, are pushing for gender-neutral language, and all students must abide by this,” Jeffers recalled. “She told me that ‘mankind’ does not refer to all people, only males. I refuted, stating that it DOES refer to all people, [but] she proceeded to tell me that I was wrong, ‘mankind’ is sexist, and I should make an effort to look beyond my preset positions and ideologies, as is the focus of the class.”

Jeffers noted that Scott informed her that she could appeal the grade to the department chair, but otherwise “refused to correct her original markdown,” elaborating on her reasoning in the aforementioned email to Jeffers.

Following the meeting, Scott also sent an email to the entire class recounting “an important discussion that I had with one of our class members today about gender-neutral language,” using the incident as an opportunity to explain why she imposes the requirement.

“In a class such as this, wherein the course goals, discussions, readings, and assignments are all focused on what makes us ‘human’ and the assumptions we make about such a concept, it is crucial that we also understand what our word choices mean a great deal and have consequences in terms of what we reveal about our assumptions about ourselves and others, and the world generally,” Scott asserted.

She then listed several examples of rhetorical prejudice found in reading assignments, such as a father telling his son to find another woman to procreate with, calling someone “kin of Cain” to imply that they have an evil nature, and referring to a disfigured person as a “Moor.”

None of the examples directly touches on the issue of gender-neutral language, but Scott went on to elaborate that, “in a similar fashion, the words we choose to refer to humanity, to people in general, also have a history, a context, and built-in assumptions.” 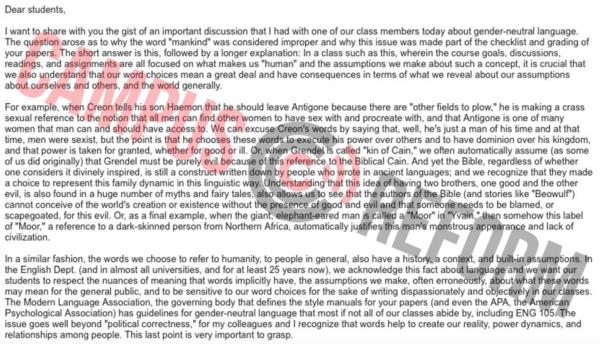 “The issue goes beyond ‘political correctness,’ for my colleagues and I recognize that words help to create our reality, power dynamics, and relationships among people,” she told the class. “You are welcome to make a statement about your politics, or conscience, or beliefs by using gender-specific language in your papers, and in many cases gender-specific language is called for, when you can discern with certainty the gender of the characters and author you’re discussing. However, I’ll still have to subtract a point or two for any kind of language that refers to all people as ‘mankind’ or readers as ‘him/he’, for the reasons I’ve outlined carefully above.”

Shanna Nelson is an Arizona Campus Correspondent, and reports liberal bias and abuse on campus for Campus Reform. She is sophomore at the University of Arizona majoring in PPEL (Philosophy, Politics, Economics, and Law) and German Studies. She was previously a Field Coordinator at McSally for Congress