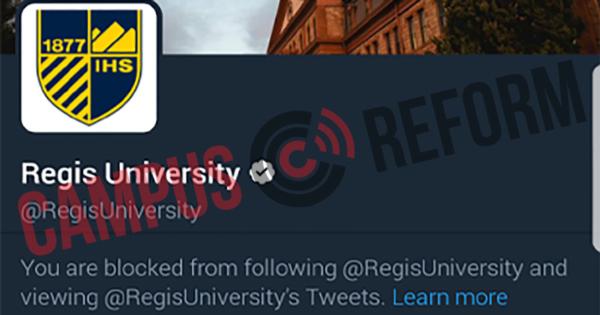 Regis University blocked one of its students from viewing its Twitter account following a dispute with administrators over free speech on campus.

“I had [attempted] to mention Regis University in a tweet to a Catholic Priest from Canada who was showing some support,” Alexander Beck told Campus Reform. “[I] was unable to mention them, [and] after going to their page, I saw that I was blocked.”

Beck, the president of the school’s Young Americans for Liberty chapter, was holding a “Social Justice Bake Sale” earlier this month as a counter to “Social Justice Week” programming when he was approached by Dean of Students Diane McSheehy, who claimed that the event was a “demonstration” that had not received approval.

Following the incident, Beck told Campus Reform that he was contacted by Dr. Nicki Gonzalez, the head of the Diversity Program at Regis as well as Beck’s advisor, who asked to meet with him to hear his perspective on the situation.

Beck agreed to the meeting, during which he confronted Gonzalez about a meeting she had organized without his knowledge with all of the students and faculty members who had complained that the bake sale “made them feel unsafe.”

An audio recording provided to Campus Reform begins with Beck telling Gonzales that he had learned about the meeting from an attendee, who described the atmosphere as “very hostile” toward Beck, but requested anonymity after being shouted down for defending Beck’s right to know about a meeting at which he was the sole subject of discussion.

Gonzales admitted to sending a “last minute public invite” aimed at those who had filed “bias” complaints about the bake sale, but assured Beck that he would have been welcome to attend.

Beck told Campus Reform that he has received numerous threats, has been “followed” around campus, and even had his property defaced by an “anti-fascist” group in recent weeks, and says he now feels betrayed by his own professors and advisors.

After his meeting with Gonzales, Beck reached out to Provost Janet Houser to ask for direction on how to go forward for the remainder of the semester at Regis, in light of recent events.

“I asked her to facilitate me finishing classes this [semester] by doing something about Gonzales & Co,” Beck explained, but told Campus Reform that Houser refused to help him, even saying, "It's not that I can't do anything; I am not going to do anything."

Houser allegedly went on tell him that as a woman, the content of the bake sale sign was "deeply offensive” to her and "racist" towards others.

It was only after the conversation with Gonzales, Beck said, that he discovered he had been blocked by the Regis University Twitter account.

Campus Reform has sought comment from Gonzales and Houser, as well as spokespersons for Regis University, and is currently awaiting their responses. This article will be updated if and when their replies are received.