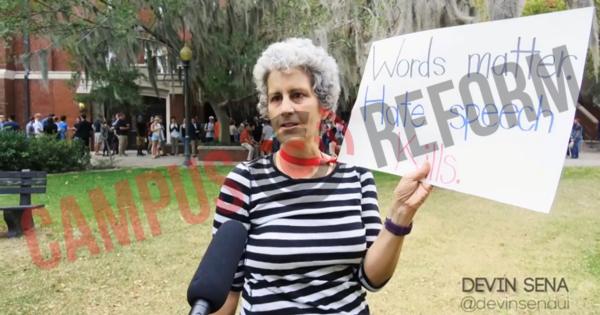 A University of Florida professor tried to conceal her identity while protesting outside a Ben Shapiro event Monday, though she willingly volunteered her opinion that "hate speech" should not be protected under the First Amendment.

Before Shapiro’s speech, a few protesters gathered to rally against free speech, the “rape culture,” and Israel. Among them was Linda F. Hayward, an associate professor at the College of Veterinary Medicine, who carried a sign proclaiming, “Words matter. Hate speech kills.”

When pressed on whether she is a member of faculty at the university, Hayward can be seen hiding her I.D. and refusing to state her full name, though a photograph was taken of the badge before she concealed it. 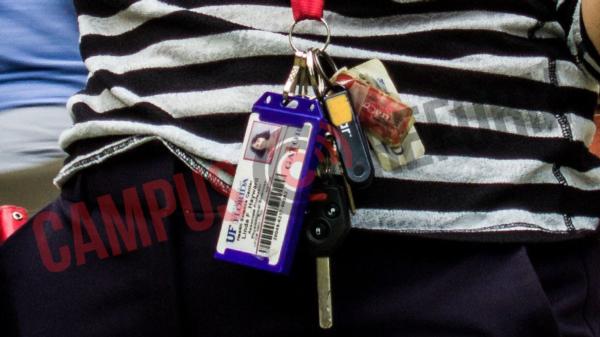 When asked to define “hate speech,” Hayward answered that “hate speech is when you attack specific groups or people...like, you make fun or have derogatory comments about transgender people or women.”

She indicated that she was not able to attend the Shapiro lecture because there was no room remaining, but said she would have liked to have a chance to find out “how he would propose to bring groups together,” though she was unable to cite a single instance in which Shapiro had made a derogatory comment towards the transgender community.

The Daily Nerv concluded by asking Hayward to weigh in on the debate over whether “hate speech” should be considered a protected form of speech, to which she answered “at some point, no,” elaborating that “it shouldn’t be protected [because] it becomes dangerous.”

The Daily Nerv’s Eduardo Neret collaborated with Devin Sena to capture the footage.

This article was originally published by The Daily Nerv. It is reproduced here with permission.

The Daily Nerv is an independent student publication at the University of Florida that covers campus news and provides analysis of national political issues from a conservative perspective.

1 Articles by The Florida Daily Nerv