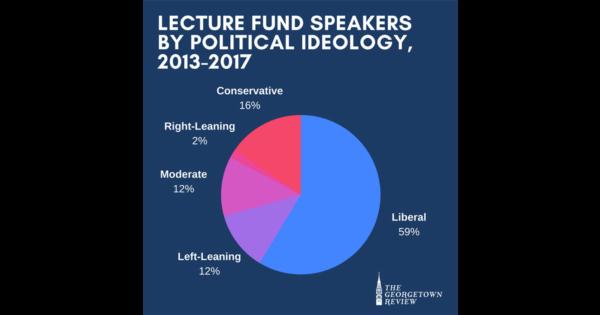 Over the last four academic years, an ostensibly non-partisan lecture fund at Georgetown University hosted nearly four times as many liberal speakers as conservative ones.

The Georgetown University Lecture Fund describes itself as a “non-partisan student run organization” focused on promoting dialogue through various campus events, but an analysis of its activities in recent years indicates that 71 percent of the speakers it has hosted have either been “liberal” or “left-leaning,” compared to just 18 percent who were “conservative” or “right-leaning.”

The Georgetown Review compiled a list of all Lecture Fund speakers between October 1, 2013 and March 15, 2017 and classified each political speaker on a continuum from liberal to conservative. Speakers who had not publicly expressed strong political stances were excluded from the analysis.

Georgetown has historically hosted many of Washington, DC’s most prominent government officials and elected representatives, each of whom has used the university’s platform to influence conversations on the nation’s most critical policy questions. The ideological distribution of speakers who have worked in government as elected officials reflects the overall trend represented in the distribution of events. 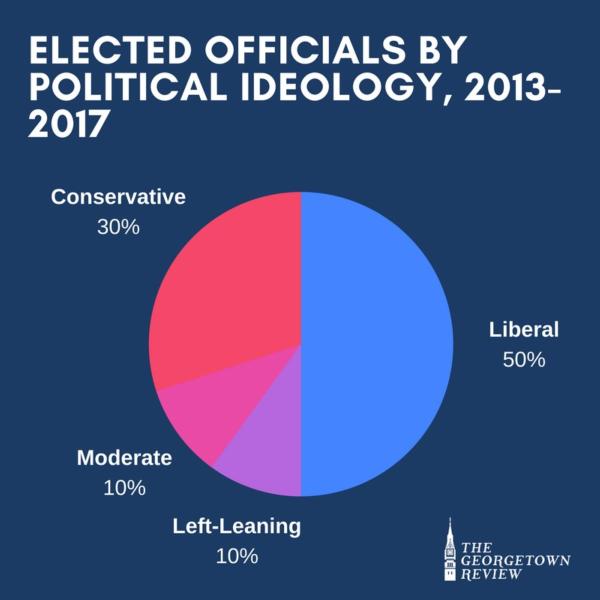 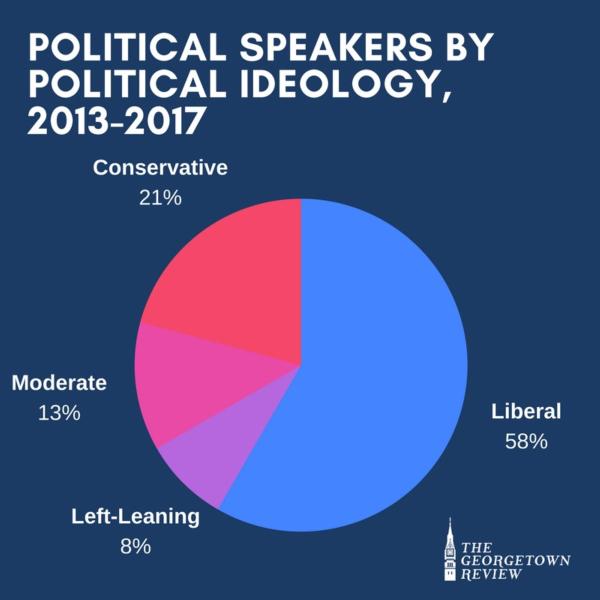 In both cases, liberal speakers significantly outnumber moderate and conservative speakers. The ideological divide is slightly less pronounced in these groups, especially among elected officials. However, liberal and left-leaning speakers still represent a majority of the speakers hosted by the Lecture Fund.

To confirm a consistent trend, the Review examined the possibility that a single outlying year could have skewed the total number of speakers during the four-year period, but found that the trend lines of speakers by ideology suggest otherwise. 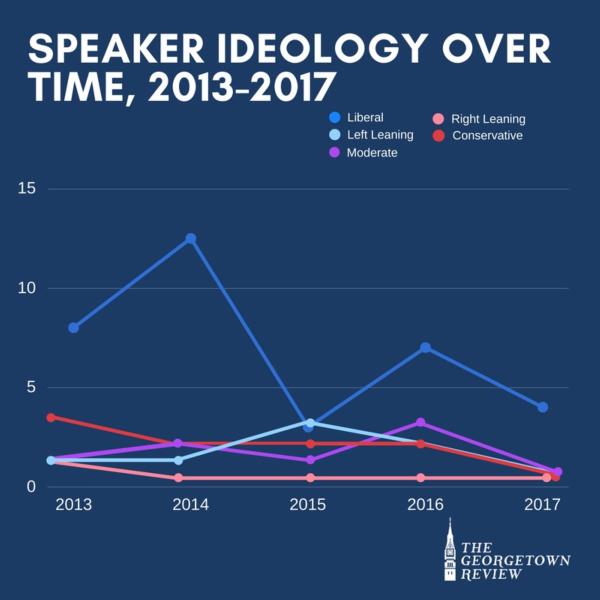 The data is incomplete for 2017 as it comprises only the first 3 months of the year, but the results so far indicate a possible continuation of this trend.

There are several possible explanations for the drastic difference in the number of liberal and conservative speakers, the first of which is that the Lecture Fund’s choices could simply reflect the political views of the student body at large, which tends to identify as more liberal than conservative.

Conservative speakers can also be highly controversial on college campuses today, as evidenced by the student protests against Christina Hoff Sommers when she spoke on campus in 2015 at the invitation of the GU College Republicans, and it is also possible that the Lecture Fund has sought to avoid provoking a similar level of controversy with its events.

Finally, the period represented in the data coincides with a Democratic administration in the White House, meaning more liberals occupied high-profile government jobs at the time.

Whatever the exact reason, the data is clear: Lecture Fund guests—both in and out of government—have been overwhelmingly liberal.

As a new Republican administration and Congress come to power in Washington, D.C., the Lecture Fund has perhaps the clearest opportunity in nearly a decade to expand the political breadth of its invited and sponsored guests.

The Georgetown Review reached out to representatives of the Lecture Fund for comment, but did not receive a response in time for publication.