Justin Caruso and Anthony Gockowski Contributor, The Daily Caller on May 25, 2017 at 4:03 PM EDT 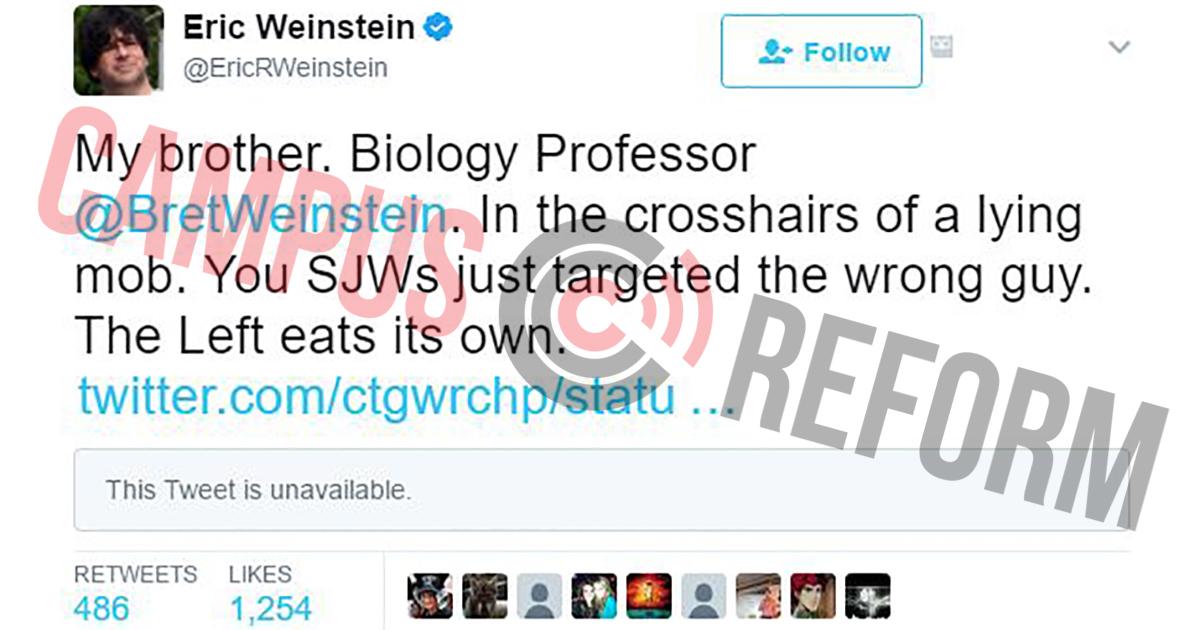 Students are calling for the resignation of an Evergreen State College professor who questioned the school’s request that white people vacate campus during a day-long event for people of color.

The school has long hosted an annual two-part event known as the “Day of Absence and Day of Presence,” which traditionally begins with a day of off-campus programming for students of color (the “day of absence”) that coincides with on-campus workshops for the white population, followed by a “day of presence” during which students compare notes from the experience.

"The left is now mobilizing against itself to push its overused rhetoric on every free thinker."

This year, however, The Cooper Point Journal reports that the format was flipped in response to complaints from non-white students that they feel unwelcome on campus in the wake of Donald Trump’s election, with white students and faculty members being asked to vacate the campus for the day.

The decision did not sit well with Professor Bret Weinstein, who sent an all-staff email arguing that the new approach radically changes the nature of the event from aspirational to condemnatory.

“There is a huge difference between a group or coalition deciding to voluntarily absent themselves from a shared space in order to highlight their vital and under-appreciated roles and a group or coalition encouraging another group to go away,” Weinstein wrote, calling the latter a “show of force, and an act of oppression in and of itself.”

The missive became public, resulting in an on-campus confrontation Wednesday between Weinstein and student protesters, in which Weinstein attempts to engage in dialogue with the students, who in turn call him a “piece of shit” and ask for his resignation, as seen in video footage of the altercation.

“You’re useless, get the fuck out of here,” she adds, saying “fuck you, you piece of shit” as her peers ask Weinstein for an explanation of his email.

Weinstein attempts to answer--asking “may I answer that question?”--but the student protesters suddenly decide that they no longer want his explanation, and respond with a resounding “no!”

“You said some racist shit, can you apologize,” one protester shouts, to which Weinstein responds by saying “I did not, I did not,” even noting that he had been in favor of the Day of Absence event until organizers encouraged white faculty and students to leave campus.

Weinstein’s brother, Eric Weinstein, took to Twitter to denounce the “lying mob,” even asserting that “you SJWs targeted the wrong guy,” noting that “the Left eats its own.”

Weinstein’s continued efforts at conversing with the protesters proved futile, and the students eventually began marching through campus and shouting “Hey hey/ho ho/Bret Weinstein has got to go.”

One protester can even be heard recruiting fellow students to join the protest by asking them if they “support black students” and telling them that the protest is “more important” than their class work.

The protest apparently got so out of hand that Professor Weinstein reported on Twitter that the police had warned him that he would not be “safe on campus” because they could not protect him.

“To be clear: the police told me I am not safe on campus. They cannot protect me. Students in jeopardy. No contact from admin,” Weinstein wrote. 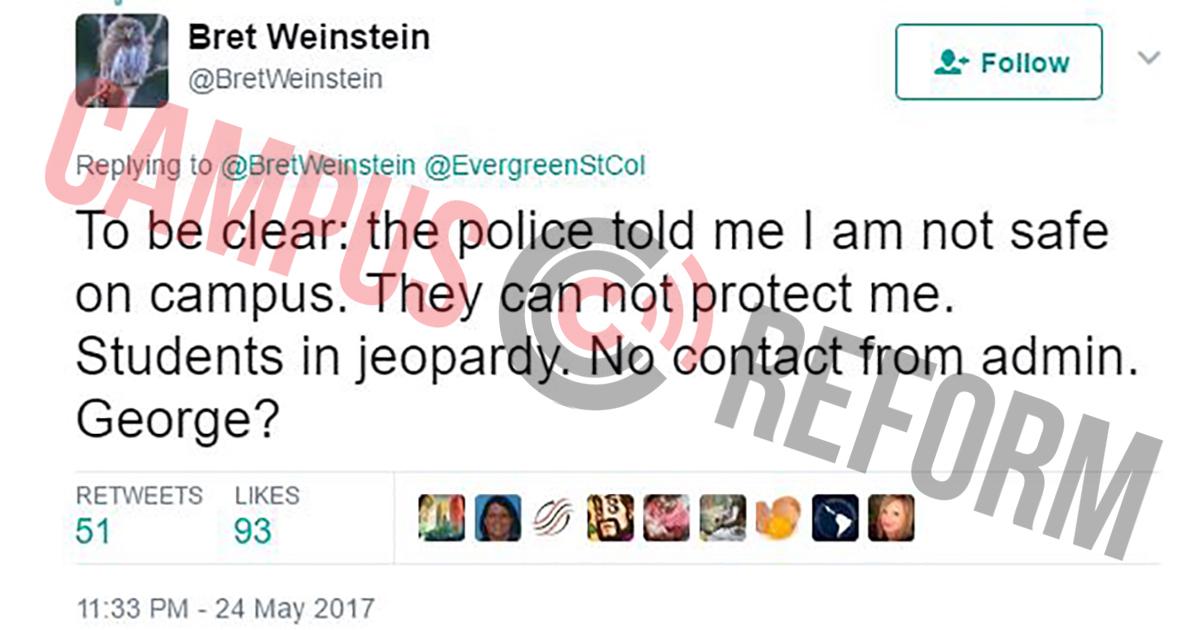 In another tweet, he alleged that students defending him have been “singled out” and threatened, posting a screenshot of an individual who claimed to have the “names and faces of students in Bret’s class” so that other can “see these faces for your own safety.” 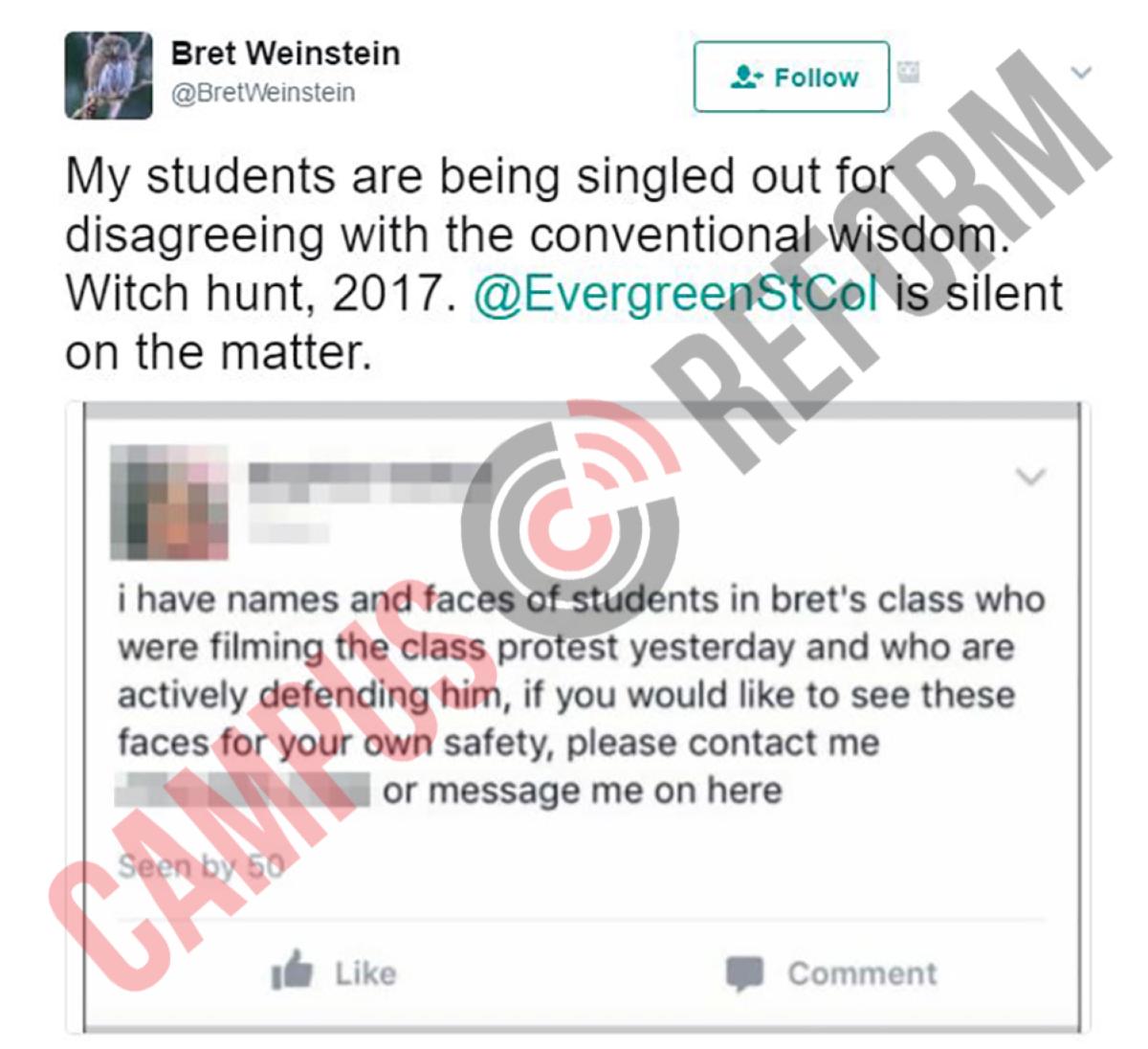 Meanwhile, The Olympian reports that hundreds of students participated in the protest, which was also partly inspired by “anti-black comments on social media.”

According to a blog post on Liberty Hangout, student Kai-Avé Douvia became “public enemy number one” on campus after he responded to a post from a peer advocating for the creation of a class specifically for “black/brown people” to study multiculturalism.

In his response, Douvia had experimentally reworded the post to replace “black/brown” with “white” in an effort to demonstrate the post’s racist nature, sparking a backlash on social media that eventually escalated to public shaming and threats from classmates.

“Rather than respectfully responding and having civil discourse, I was then threatened and/or insulted by many so called ‘inclusive activists,’ leading to me to contact the police for protection,” Douvia writes in his blog on the matter. “This highlights a massive issue--the left is now mobilizing against itself to push its overused rhetoric on every free thinker, and if you disagree well, welcome to being every ‘-ist’ in the book.”

Evergreen State has since acknowledged the unrest on campus, but gave no indication as to how, or whether, the administration intends to respond.

“It’s been an intense and useful conversation with a group of students,” spokesperson Zach Powers told The Olympian. “The college is working with the group to address their issues. This type of conversation is being replicated across the country right now. We remain committed to providing a great education to all students.”