Cornell University is encouraging students to file bias reports against classmates who display “negative reactions” to a school-sponsored “Safe Place.”

Flyers have been posted around campus promoting a project called “Safe Place,” which aims to “affirm LGBTQ identities and lives and promote an affirmative and supportive environment” by providing participating students with pins and cards that they can display stating that they don’t discriminate and “won’t tolerate discrimination” that they encounter.

"Negative reactions tend to be very rare. If they do occur, report it...via a Bias Reporting Team member."

While Cornell already has a nondiscrimination policy that covers sexual orientation, the flyer explains that Safe Place “goes beyond the university policies” by helping students to make a “public statement of one’s personal support and affirmation of LGBTQ members.”

Anticipating that some students might wonder how to respond “if someone discriminates against me because I support Safe Place,” the flyer offers assurances that “negative reactions tend to be very rare,” but encourages anyone who encounters such behavior to “report it...via a Bias Reporting Team member.” 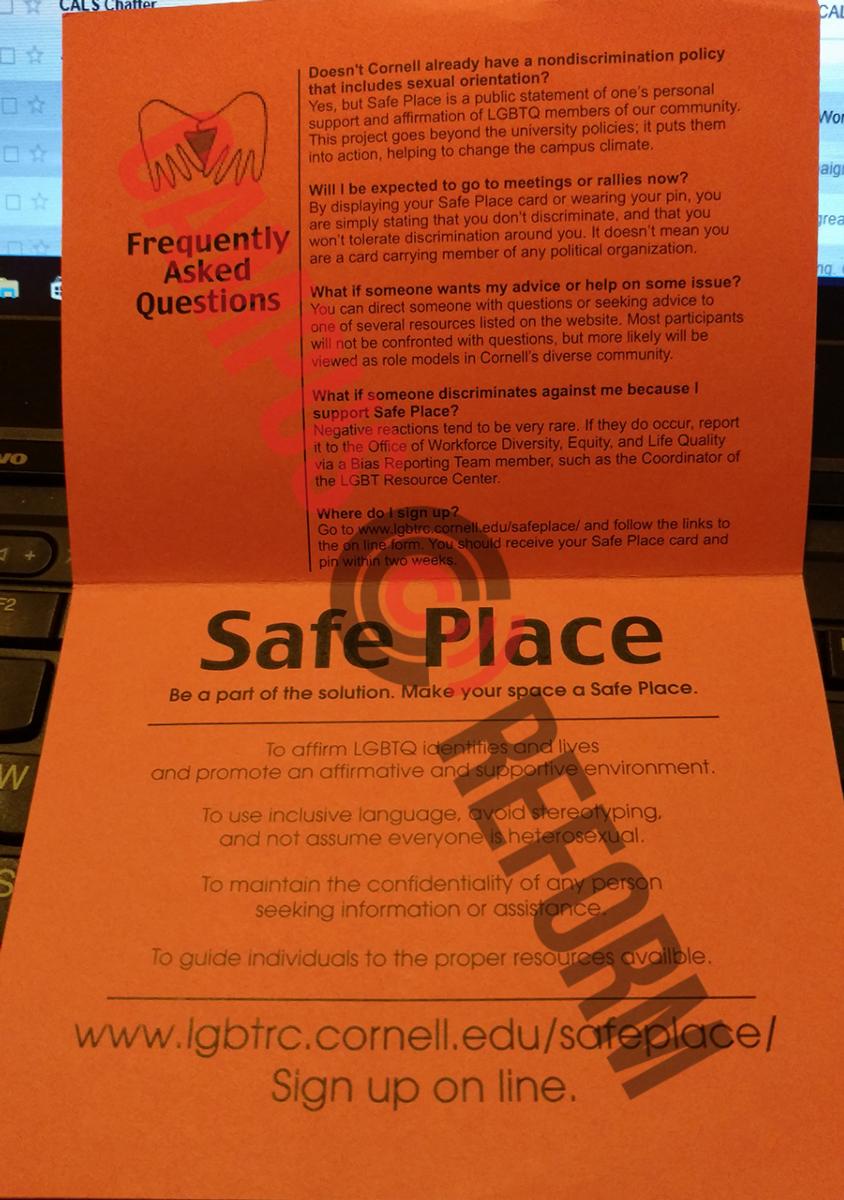 According to the university’s bias reporting page, Cornell specifically defines bias as “an act of bigotry, harassment, or intimidation” that is based on an individual or group’s “actual or perceived aspect of diversity.”

Of the 113 bias incidents reported to the school in 2016, 28 were based on “gender/gender identity/expression,” including accusations that employees were “intentionally using the wrong pronouns” to refer to a transgender colleague and that “a student had sent an email to another student that included a scripture from the Bible with certain categories highlighted, including ‘homosexuals,’ in response to an invitation to an orientation activity, causing the student to feel targeted by the individual.”

Below the disclaimer about reporting “negative reactions,” the flyer lists the commitments that Safe Place participants are asked to make, such as pledging “to use inclusive language, avoid stereotyping, and not assume everyone is heterosexual.”

Cornell’s LGBT Resource Center, which oversees the Safe Place program, suggests the use of gender-neutral pronouns such as “sie, zie, and they” as examples of inclusive language.

Safe Place participants are also expected “to maintain the confidentiality of any person seeking information or assistance,” and to “guide individuals to the proper resources available,” though the flyer notes that “most participants will not be confronted with questions, but more likely will be viewed as role models in Cornell’s diverse community.”

Campus Reform reached out to the university for comment, but received no response.