An Indiana University, Bloomington student organization used a recent campus fair to promote Antifa propaganda and the destruction of property.

The group, known as “Students Against State Violence” (SASV), is a self-proclaimed anti-capitalist organization seeking to build “a movement against cisheteropatriarchy, white supremacy, imperialism, ableism, and class oppression,” according to its Facebook page.

"Should we desire to merely ‘unlearn’ oppression, or to smash it to f***ing pieces?"

One of the pamphlets, a resource provided by indigenousaction.org titled Accomplices Not Allies: Abolishing the Ally Industrial Complex, asserts that “non-profit capitalists advance their careers off the struggles they ostensibly support,” asking readers “should we desire to merely ‘unlearn’ oppression, or to smash it to f***ing pieces?”

The physical copy of said resource, obtained by Campus Reform, concludes with a picture of a flaming police car and the phrase “we’ll get what we can take.”

Another flyer distributed by SASV encourages students to destroy the property of white-supremacist, or even just right-leaning, organizations, saying “from destroying their flyers and stickers to physically denying the fascists space, we have the ability to stamp them out before they ever gain any power.” 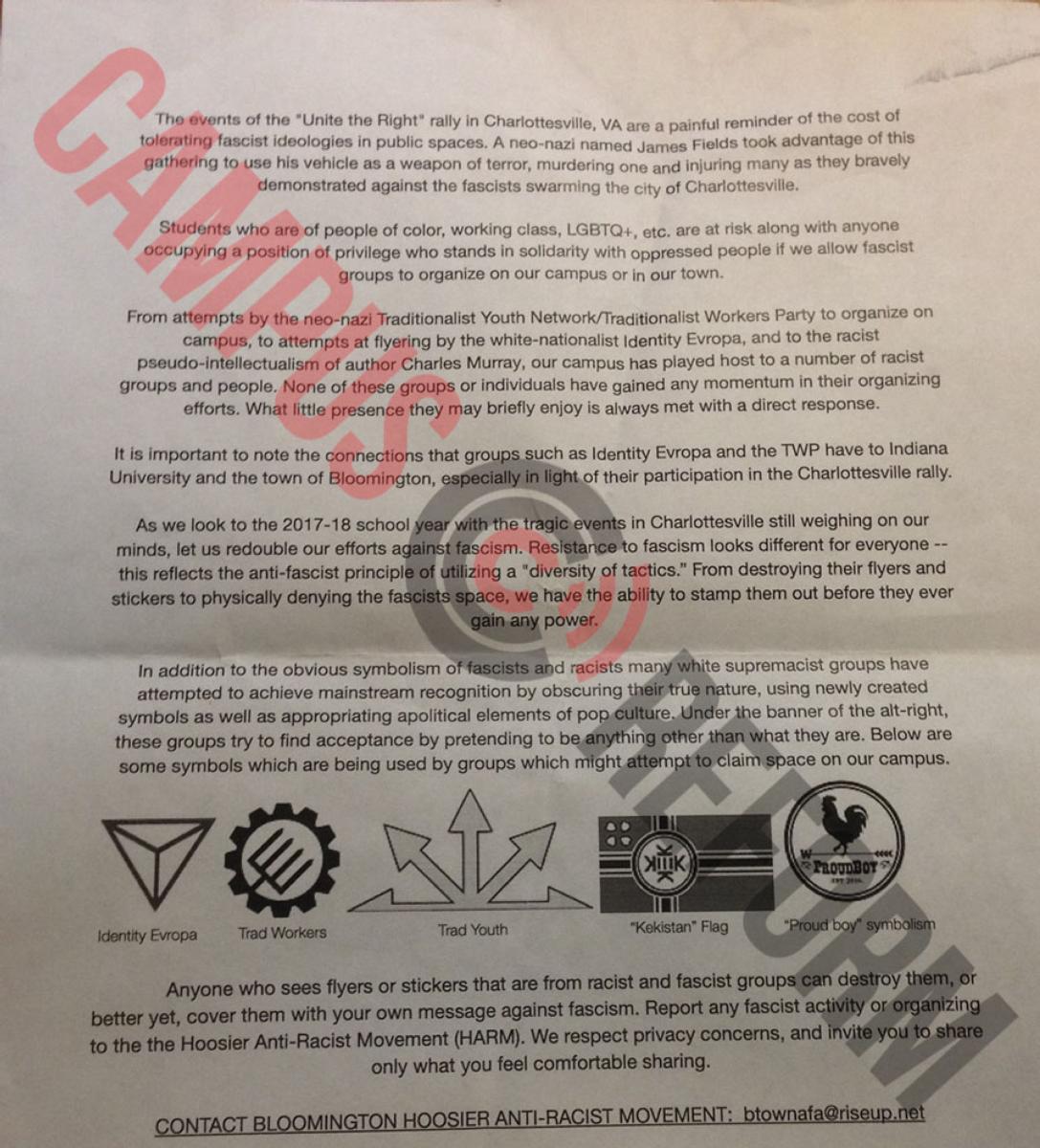 “Anyone who sees flyers or stickers that are from racist and fascist groups can destroy them, or better yet, cover them with your own message against fascism,” the flyer adds, advising students to report “any fascist activity or organizing” to the school's bias-response team.

Notably, Provost Lauren Robel rebuked the activity of SASV in an April campus-wide email, calling it “hands down the most overtly violent group on campus,” according to a letter to the editor written by SASV itself.

SASV’s president encouraged Campus Reform to read the aforementioned letter in response to its inquiries, saying “if peeling off stickers and talking over white supremacists is the sort of ‘violence’ you're concerned about right now, you're either not paying attention or you need to seriously reevaluate your priorities.”

Marissa Gentry is an Indiana Campus Correspondent, and reports liberal bias and abuse for Campus Reform. She studies Environmental Science and Policy at Northeastern University and is involved in Young Americans for Liberty and Students for Sensible Drug Policy.