The University of Southern California recently held a "Summit on (De)Institutionalizing Islamophobia on College Campuses” that compared the situation to Japanese internment.

The summit, which took place Friday, explored “how the institutionalization of Islamophobia under the guise of national security is negatively impacting today’s Muslim college students,” as well as topics such as “intersectionality, [the] Muslim ban, monolithic portrayals of Muslims, racialization of Muslims, [and] violence directed towards the Muslim community.”

"Acknowledging the connections b/w Japanese internment and the current experiences of Muslims in the US."

The event was the first to be hosted by the Center for Education, Identity, and Social Justice at USC’s Rossier School of Education, which was launched on February 1.

Another one of the event’s themes—expressed in both images on the event website and tweets from the official @RossierJustice Twitter account—was “acknowledging the connections [between] Japanese internment and the current experiences of Muslims in the US.”

One image shows two pictures of the same door. On the left side, labeled “1930,” a small notice on the door says “positively no Filipinos allowed,” while on the right side, labeled “2017,” the word “Filipinos” has been crossed out and replaced by “Muslims.”

Another image depicts scenes of Japanese internment camps during World War 2, and is labeled “Instructions to all persons of Japanese ancestry Muslim faith,” with the date “January 30, 2017” replacing “May 15, 1942.”

Both posters—which were created by the Honolulu Chapter of the Japanese American Citizens League to mark the 75th anniversary of President Franklin Roosevelt’s executive order on the internment of Japanese American citizens—also include the admonishment, “Don’t let history repeat itself.”

Among the featured speakers at the summit was Associate Professor of Interreligious Education at the Claremont School of Theology Najeeba Syeed, one of the creators of the Islamophobia is Racism online educational blog project.

According to tweets from the @RossierJustice account, Syeed discussed Islamophobia as both a social and a political problem during her presentation. 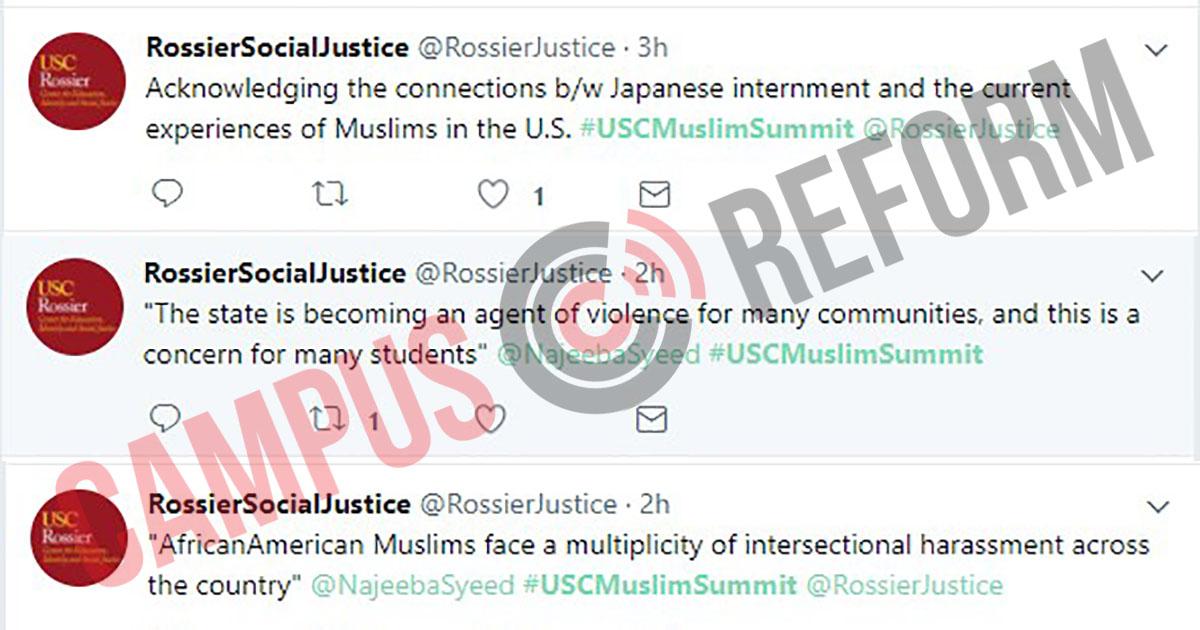 “The state is becoming an agent of violence for many communities, and this is a concern for many students,” one tweet quotes her, while another states that “African American Muslims face a multiplicity of intersectional harassment across the country.”

Campus Reform reached out to the Rossier Center for elaboration on the themes presented at the event, but received no response.