UCLA students are demanding a lecturer be fired after refusing to grade black students differently.

An online petition demanded that Gordon Klein lose his job for refusing to give black students "accomodations" in light of recent protests. 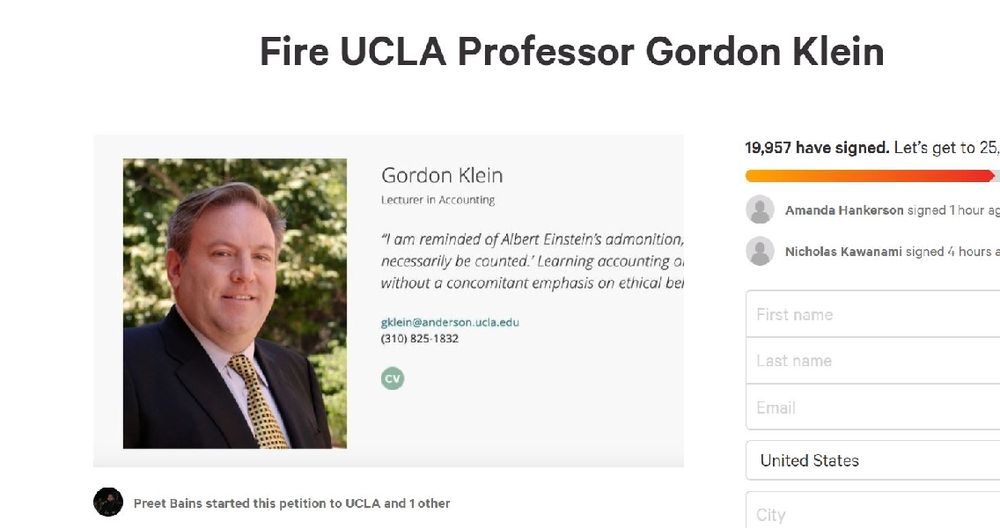 One academic’s response to an email from a student has resulted in a massive backlash against him, including calls for him to be fired.

University of California-Los Angeles Lecturer Gordon Klein faces an online petition that asks UCLA to terminate his employment, following an email he allegedly sent to a student regarding "special treatment" for black students in light of the George Floyd protests.

The viral petition, signed by nearly 20,000 people, claims Klein’s “blatant lack of empathy and unwillingness to accommodate his students during a time of protests speaks to his apathetic stance on the matter.”

UCLA Anderson School of Management spokeswoman Rebecca Trounson confirmed to Campus Reform that Klein is "on leave from campus and his classes have been reassigned to other faculty."

“Given his background in ethics and liability, one would expect Professor Klein to hold himself to a higher social standard, especially given his position as a steward within higher education,” the petition reads. “However, his response to students was inappropriate, tone-deaf, and highly insensitive.”

“Thanks for your suggestion in your email below that I give black students special treatment, given the tragedy in Minnesota,” Klein’s email read, according to the petition. “Do you know the names of the classmates that are black? How can I identify them since we've been having online classes only? Are there any students that may be of mixed parentage [sic], such as half black-half Asian? What do you suggest I do with respect to them? A full concession or just half? Also, do you have any idea if any students are from Minneapolis? I assume that they probably are especially devastated as well.”

Klein’s email continued, “I am thinking that a white student from there might be possibly even more devastated by this, especially because some might think that they're racist even if they are not. My TA is from Minneapolis, so if you don't know, I can probably ask her. Can you guide me on how you think I should achieve a 'no-harm 'outcome since our sole course grade is from a final exam only? One last thing strikes me: Remember that MLK famously said that people should not be evaluated based on the "color of their skin." Do you think that your request would run afoul of MLK's admonition?”

“His behavior is not reflective of the equity, respect, and justice that UCLA stands for as an institution,” the petition reads. “As Professor Klein so emphatically states on his profile page on the Anderson School of Management website: ‘Learning accounting or any quantitative discipline, without a concomitant emphasis on ethical behavior, is not a true education’.”

“We ask for your support now in holding Professor Klein to the same ethical standards he claims to be essential to a holistic and inclusive educational experience, which is what he owes to his students as an educational leader. We, the students, refuse to support Gordon Klein any further and demand to see his employment terminated as soon as possible.”

After receiving news of the university placing Klein on leave, one of the organizers said, “I would like to thank everyone for their support and please keep sharing to ensure he is completely dismissed from his position. The fight to hold him accountable is not yet over.”

"UCLA acquiesced to the mob instead of defending Professor Klein,” Bruin Republicans told Campus Reform. “The proponents of cancel culture are all too eager to destroy the reputation of anyone who stands in their way. It is impossible to have an intellectual academic environment where only one side of the political spectrum is deemed appropriate."