The college first defended its action but eventually caved to student demands. 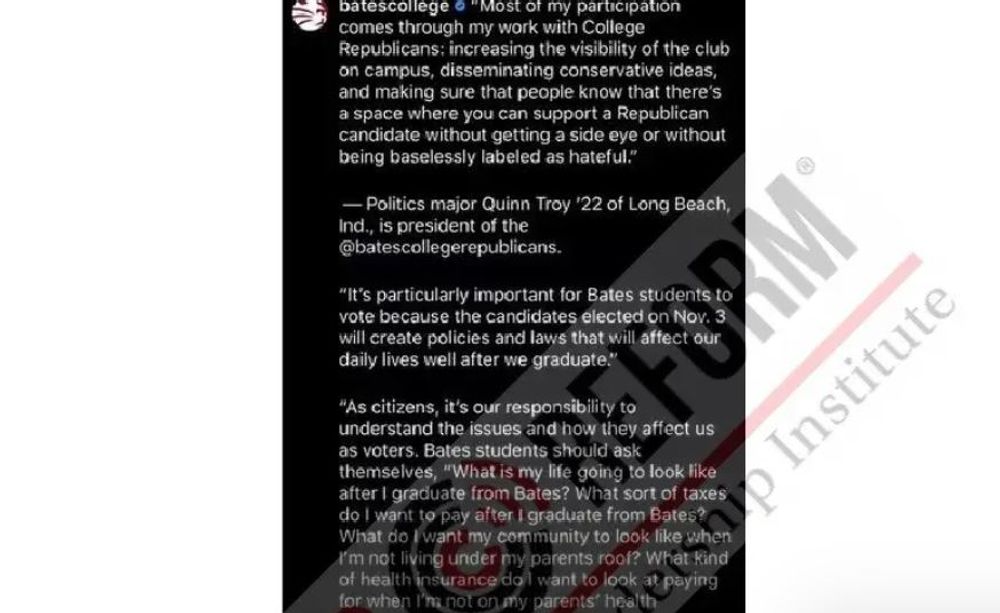 Bates College in Lewiston, Maine was successfully pressured by students to delete an Instagram post that featured a conservative student and his thoughts on the importance of voting.

Bates College asked Bates College Republican President Quinn Troy to send a photo and statement to be featured on its Instagram account as part of an effort to get students to vote. The now-deleted post featured Troy and quoted him on his work with the College Republicans, but Troy stressed the importance of voting, regardless of political affiliation.

“Most of my participation comes through my work with College Republicans: increasing the visibility of the club on campus, disseminating conservative ideas, and making sure that people know that there’s a space where you can support a Republican candidate without getting a side eye or without being baselessly labeled as hateful.”

“Just make sure you vote,” Troy’s statement concluded. “Either way you vote, we should be able to coexist with one another regardless of political affiliation. I think that’s the most important part.”

Immediately, the post was flooded with comments from students insisting that featuring a conservative student was wrong, and actively harmful to the community.

“We, too, believe that we should be able to “coexist peacefully”... except when we’re being forced to coexist with people that want to kill us, poison us, and push us into war,” the Bates Black Student Union posted in response.

Later that day, Bates College posted a statement on Instagram from President Clayton Spencer that defended the decision to include a conservative in the post.

“The right to free speech - including, especially, robust debate of political views - is a core value of our democracy,” Spencer said. “The freedom to form one’s views and values by one’s own lights is also of the essence of a liberal arts education. We can only be a healthy college and society when all of us are prepared to subject our own views to scrutiny and debate, and consider the contrary views of others.”

The ability of users to comment on both the original post and Spencer’s defense were later disabled and, eventually, the posts were deleted altogether.

Bates cited “a number of violations of the college’s social and digital media comments policy” as the primary reason for the deletion.

[RELATED: Student calls out bias against conservatives on campus. The response proves her point.]

In an Instagram post, the Bates Student Government said that the college “should not claim that both sides of this conversation are equal."

“If Bates wants to claim that it cares for all its students,” the post continued, “especially those who are persecuted directly by the actions of this administration and all its supporters, then it cannot pander to those who actively work to attack, limit, or deny the rights of those students."

As a result of the Instagram post, students organized a walk-out and held a socially-distanced protest on October 30. During the protest, according to The Bates Student, the college's president and communications director both apologized for the Instagram post.

Bates College Communications Director Sean Findlen said at the protest that various mistakes were made during the process of making the Instagram post, and told students that it would be deleted.

Troy told Campus Reform that the college community's reaction to the Instagram post has made life as a student more difficult.

"Although I’m trying to move on, the days after the post went up were really difficult. I felt completely isolated on campus. I went from being a normal college student to feeling like I didn’t belong," Troy said. “I know that the college had the best of intentions when they reached out to feature my opinion for the Instagram."

Campus Reform reached out to Bates College for comment but did not receive a response.