A University of California Davis professor committed to a work stoppage on May 3 to “demand cops off campus.”

The professor, during one lecture, shared a slide arguing that prisons do not "stop" murder or rape. 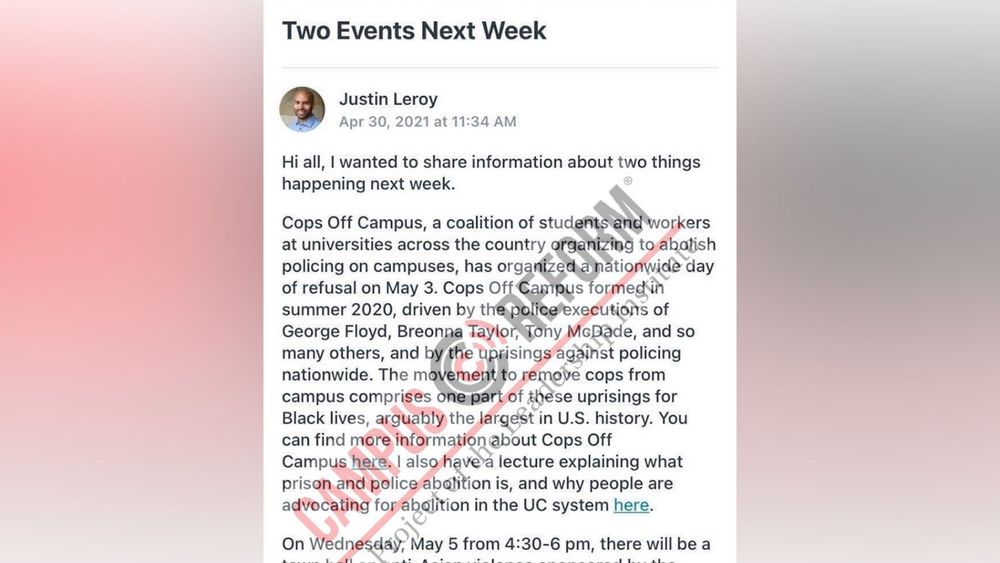 In a presentation promoted by a coalition committed to abolishing the police on campus, a University of California Davis professor pledged to participate in the “May 3 Day of Refusal to Demand Cops Off Campus” and called for the abolition of police.

Campus Reform reported on the declaration of May 3 as the “Day of Refusal to Demand Cops Off Campus” by the national Cops off Campus Coalition. Over 750 professors, organizations and students pledged to “absent myself from work, class, teaching, and more.”

Campus Reform obtained an email sent by one of the petition’s signers, an assistant professor of history at University of California Davis Justin Leroy. In the email sent to his Black History in America class, Leroy explained the goal of Cops Off Campus as well as the May 3 “Day of Refusal.”

“Cops Off Campus formed in summer 2020, driven by the police executions of George Floyd, Breonna Taylor, Tony McDade, and so many others, and by the uprisings against policing nationwide,” the email stated.

“The movement to remove cops from campus comprises one part of these uprisings for Black lives, arguably the largest in U.S. history,” Leroy continued.

The professor also included links to the Cops Off Campus website, why people are in favor of abolishing police on University of California campuses and promoted his lecture on “police abolition.”

[RELATED: Georgetown students demand to abolish campus police, even with DC crime on the rise]

Leroy published an “Abolish Police” lecture which was tweeted out by the Cops Off Campus Twitter account for other professors to use in their classes.

🗣Hey profs, your work's done! Justin Leroy (@DrownedNegro) made an *incredible* lecture for #AbolitionMay's Day of Refusal (May 3)! Use it in classes across Turtle Island instead of your May 3 lecture!! Transcript here: https://t.co/nlOxqKNogR VID here: https://t.co/PZLXmi1cQE

In the presentation, Leroy claims that campus police departments are “increasingly militarized,” “violent by design and cannot be reformed.”

Leroy advocates for a focus on “reducing harm” instead of “crime.”

"Instead of responding to reports of sexual assault with armed police officers that worsen trauma for survivors, what if we worked to create strong supportive communities that provide long term care for survivors, and community accountability for those who do harm?,” Leroy states.

When answering the objection, “What about the rapists?,” Leroy shares a slide that states there is a “high level of sexual violence in prison.”

"It's also important to remember that prison itself is a source of sexual assault," Leroy says.

“There are some rapists in prison, more rapists outside of prison. The prison is not a way to stop rape, the prison is the rapist,” the slide states.

A student currently taking Leroy’s class told Campus Reform that she is “extremely disappointed in [her] Professor for not only for signing onto this letter but for promoting it to his students.”

“College should be a place where we hear the facts of the lesson we seek to learn, not be encouraged to disrespect law enforcement. While there may be a conversation to be had about policing tactics, calling for the removal of police from campus will only just put students in more danger,” she continued.

“Instances of police brutality against students are abnormally rare & instead of calling for dealing with those instances, the Professor signs onto a [sic] extremist letter that will put us all in more risk,” she concluded.

A student who previously took Leroy’s History of Global Capitalism course told Campus Reform that although he believes signers “have the right” to abstain from university activities, they should be prepared to face the consequences of their actions.