Ithaca College violated its own policy by flying the Palestinian flag for 21 days on a special flagpole that students can ordinarily reserve for a maximum of one week per semester.

Ithaca College allowed students to fly a Palestinian flag from the “Campus Center Flagpole,” which was erected in 2003 so that student organizations and departments could fly “special interest flags.”

“This practice began when the African-Latino Society flew the African-American flag from the College’s main flagpole to celebrate Black History Month in February 2001,” a nearby plaque explains, saying the flagpole serves as a reminder that “this opportunity for free expression continues today.”

“This flag went up on 11/9 and was requested to fly until 11/30,” Sybil Conrad, Assistant Director for Campus Center and Event Services, told Campus Reform. “While our policy limits flag flying to one week per semester, I see there was an oversight and we didn’t catch that the requested end date exceeded our one week policy.”

The flag was taken down one day early, on November 29, an action that Ithaca College Campus Center and Event Services called a “mistake.”

“[W]e do not regulate the content of flags that are requested to be flown, and any registered student organization can request to fly a flag,” Conrad said.

[RELATED: BLM flag on display for two weeks at Northwestern]

Foreign flags are allowed, with the policy stipulating that “[t]he flag sponsored by the on-campus organization that registers their flag first will be the highest on the flagpole, unless this conflicts with the protocol for flying flags representing other countries.”

Conrad explained that the school has “an official campus flagpole that is dedicated to flying the American Flag” when asked about the restriction.

“We also fly the American Flag at our Public Safety Building and at our football stadium,” she noted. “The smaller, non-official, solicitation flagpole...outside of the Campus Center, is reserved for the flying of one or more other flags, as requested by student organizations on campus.”

The Ithaca College Students for Justice in Palestine group, which submitted the request for the Palestinian flag to be flown, did not respond to a request for comment from Campus Reform. 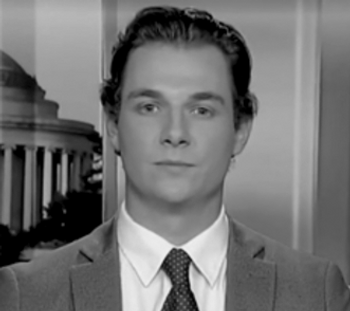