Black conservative shouted down for speaking ‘against own people’

Former NFL star and conservative commentator Burgess Owens was heckled and shouted down by students for allegedly speaking “against” his “own people” at a lecture last month.

Owens routinely speaks on leadership, especially within the black community, and the opportunities America can provide for young black men, touching on similar topics during his speech at Hobart and William Smith Colleges, where he was hosted by Young Americans for Freedom.

While he was able to deliver his prepared remarks without incident, the audience repeatedly interrupted and insulted Owens during the question-and-answer portion of the talk, so much so that the moderator eventually had to shut it down.

In one case, after questioning Owens on his views of police brutality and the school-to-prison pipeline, both of which are issues Owens deals with in his work with the One Heart Project, the audience member proceeded to ask him “what was your name again?”

“Burgess Owens,” he replied, to which the student commented that she “thought it was Tom,” in reference to Uncle Tom, before storming out of the auditorium while Owens quipped that “there goes our biggest problem.”

“The minute you start calling names, you’ve already stopped the debate,” he continued. “You’re not looking for answers. You’re looking for ways of insulting, and that’s not how Americans do it.”

[RELATED: Panel on ‘civil discourse’ shut down by uncivil protesters]

The next questioner proceeded to aggressively rip the microphone from the moderator’s hands, shouting at him while he attempted to hold on to it.

“I had the mic. You took the mic away from me. I’m talking. I’m asking a question,” the student complained as other demonstrators loudly backed him up.

He then proceeded to condemn Student Affairs for going “two-for-two” on bringing “xenophobic” people to campus who apparently speak against their own beliefs, saying that in addition to Owens, a Muslim woman came to campus and spoke “against her Islamic beliefs.”

When the moderator attempted to interrupt the student’s rant, the audience began shouting him down, with one woman screaming “let him finish!”

Owens attempted to address the audience member, but was repeatedly interrupted as the student protested that the mic was taken away from him.

The student continued address complaints to the Student Affairs staff in the room, even as the moderator repeatedly reminded him that he had “asked very specifically that the questions be directed towards the speaker.”

“You keep talking over him!” one audience member shouted. “Let him have his minute!”

“Why is it okay to bring people to talk against their own people?” the student finally asked, though when Owens attempted to answer, the student again began complaining about the “structural racism” he has experienced.

“Please let him answer the question,” the moderator interjected.

“Let me finish talking!” the student shouted back.

As Owens once again attempted to answer, the student reiterated that he was “not finished talking,” and continued to interrupt Owens.

The moderator was eventually forced to shut down the question-and-answer portion of the talk, prompting cries of “white fragility!” from the audience.

“What kind of rhetoric are you trying to spew, dude?” one audience member asked accusatorily, while another declared that the “United States is an imperialist nation.”

Another then lambasted Owens for “playing a sport,” saying he “won the American lottery.”

“We are not Americans, we are second class citizens!” one audience member interrupted, as another shouted, “you got lucky!”

“How do I succeed? It’s real simple. You first of all believe that you have a chance of doing it in this country,” Owen commented, attempting to return to the subject of his lecture, but was again shouted down by audience members saying “that’s not true!”

“My concern is that some of these speakers are not here to spread ideas, but to create controversy…My concern of a national organization driving a local agenda is just that…I just am concerned about the campus being used as a pawn,” he said, according to Katrina Willis.

“Blatant disrespect for me and my YAF members as students and thinkers usually comes sandwiched between contradictory and empty offers of support,” Willis added. “Faculty members send campus wide emails connecting our chapter to a white supremacy agenda, but without ever addressing us by name.”

Campus Reform reached out to Vincent’s office for comment, and is currently awaiting a response. 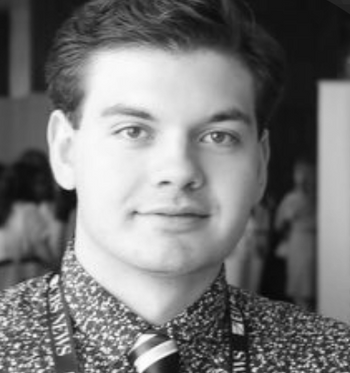 Gabriel Pietrorazio is a writer at ABC News. He was the Indigenous Affairs Editor at Finger Lakes Times and a New York Campus Correspondent. Gabriel graduated with a Masters in Journalism from University of Maryland and a Bachelor of Arts from Hobart and William Smith College.