FLASHBACK: Antifa set up a recruitment shop at University of Florida

An Antifa group showed up on the campus of the University of Florida in an effort to recruit new members.

The Anti-fascists of Gainesville invited college students to a recruitment fair for far-left radical groups, hosted by the Civic Media Center, which is not affiliated with UF and whose “mission is to provide community access to information and points of view that are under-reported or distorted in mainstream media.” The center's website says it specifically works with "progressive" groups to achieve its mission.

Campus Reform spotted a table on the UF campus in September 2019, where students were offered information about the event, called "Radical Rush," which, while hosted by the Civic Media Center, occurred on campus. The table, draped with a banner containing the words "Gainesville Antifascists," appeared in an area of campus where students and members of the public are not required to obtain permission from the college to set up tables or exercise their First Amendment rights. 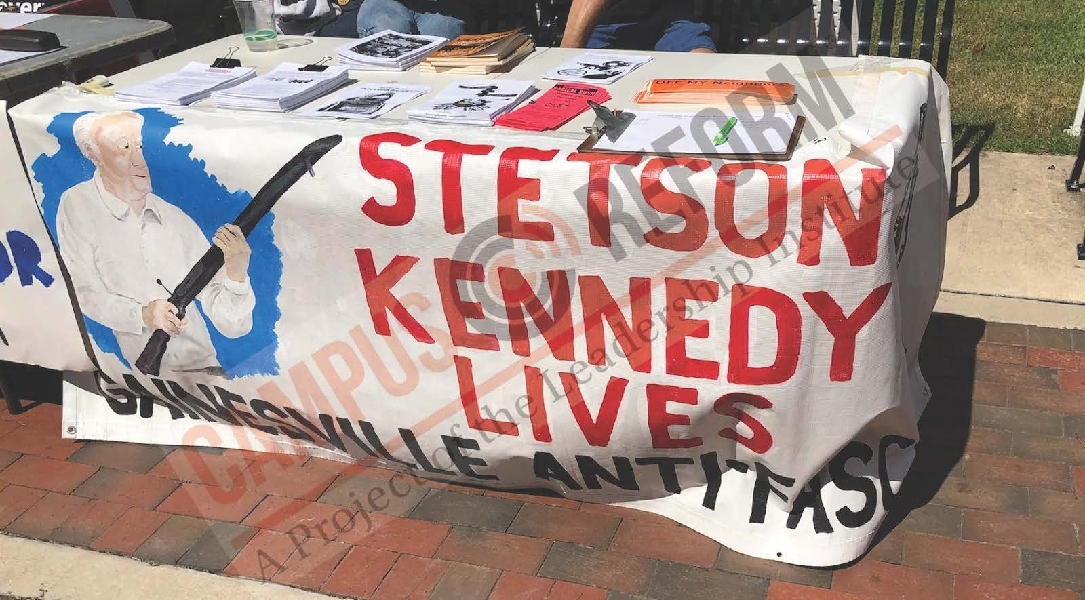 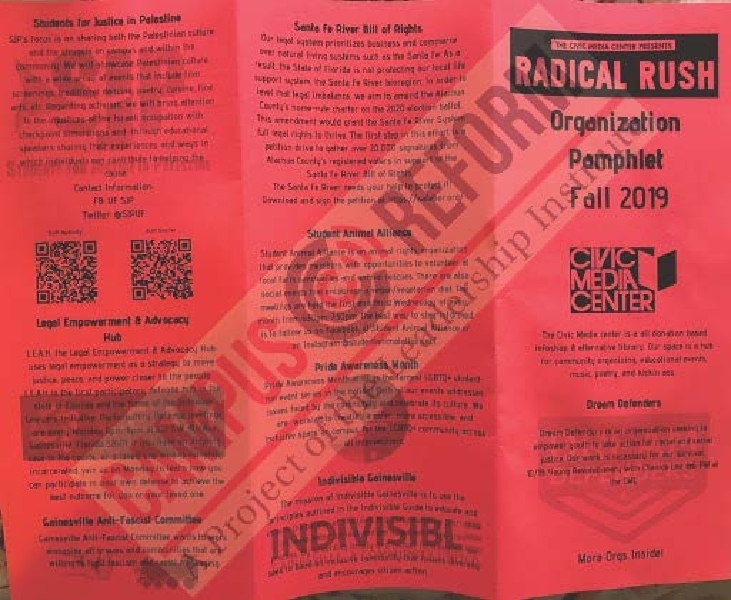 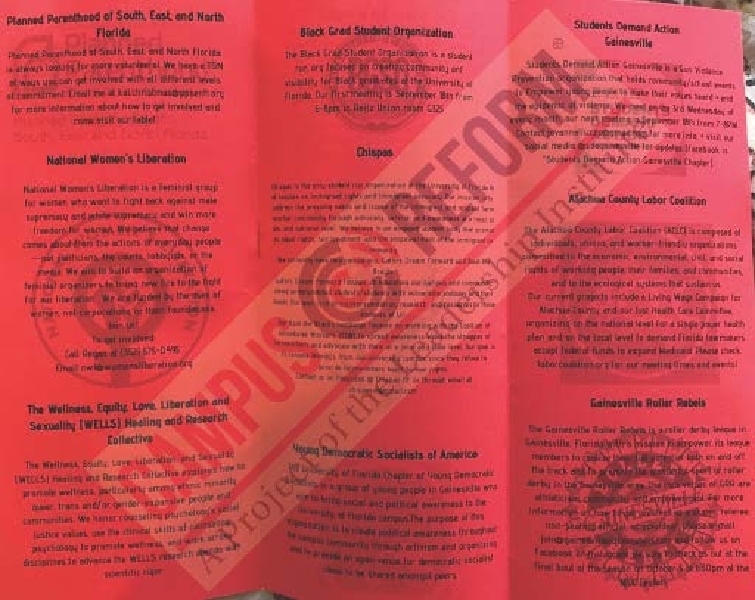 One of the flyers Campus Reform obtained at the event reads, "police are part of the problem," saying that they kill thousands of people per year, while they tear families apart and form "racist militias." The same flyer claims that “the U.S. government is already implementing the fascists' agenda more effectively than a group like the KKK ever could." A website URL for Crimethink appears at the bottom of the paper. 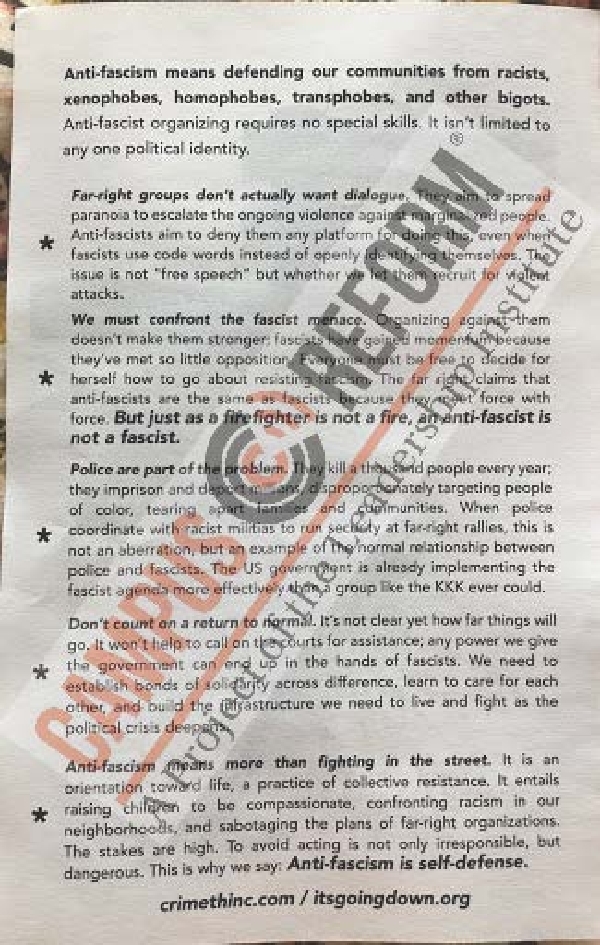 "Crimethink is everything that evades control: the daydream in the classroom, the renegade breaking ranks, the spray-painted walls that continue to speak even under martial law," its website says, adding, "it is the spirit of rebellion without which freedom is literally unthinkable."

The Gainesville Anti-Fascist Committee also distributed flyers showing a sketch of a fist in front of President Donald Trump's face. 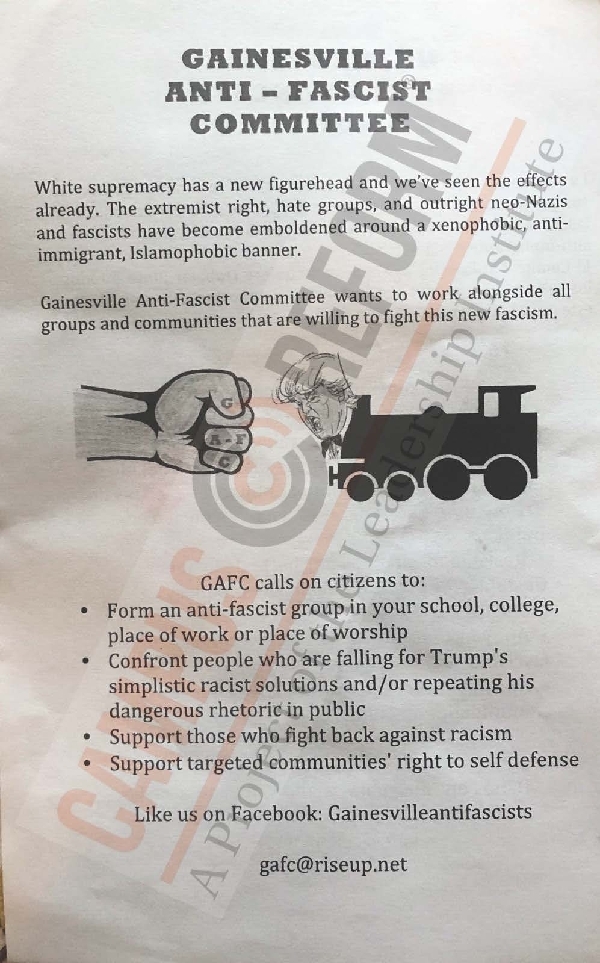 The group calls on citizens to "confront people who are falling for Trump’s racist solutions," also encouraging support for "those who fight back against racism," and "support targeted communities' right to self-defense." Another pamphlet reads “Anti-Fascism is Self-Defense.”

"It's no wonder why Antifa would target college campuses to spread their message," University of Florida student Jarrod Rodriquez told Campus Reform. "America’s universities are the bastions of radical progressive indoctrination, with biased administrators fostering a climate on campus that only caters to progressivism and a swath of privileged leftist-students who have been radicalized by their professors over the years."

[RELATED: Dartmouth prof to donate half of book proceeds to Antifa]

The University of Florida College Republicans chapter also commented on Antifa's latest recruitment efforts, telling Campus Reform, “Ronald Reagan, one of the best presidents of this great nation once said that, 'if fascism ever comes to America, it will come in the form of liberalism.' Interestingly, this is not only how it is coming to America as a whole, but how it is coming to our cities, towns, and communities.”

“We know a fundamental aspect of fascism is the use of propaganda, and that is exactly what these flyers and pamphlets are," the UF College Republicans added. "Graphics depicting fists aimed toward the President of the United States are fundamentally anti-American.”

The University of Florida College Democrats told Campus Reform that it was not aware of Antifa's on-campus recruitment and that it is in no way associated with the group.

Campus Reform reached out to the Gainesville Antifascists and the University of Florida, but did not receive comment in time for publication.