A former University of North Texas professor says he was fired after criticizing a "microaggressions" flyer.

A University of North Texas professor was fired from his job after making a joke about “microaggressions.” He is now suing UNT in federal court.

Nathaniel Hiers, who earned his Ph.D. in Mathematics in spring 2019, had been teaching at the University of North Texas since July 2019 as an adjunct professor in the mathematics department. However, on December 2, 2019, Hiers was fired unexpectedly because of his response to “microaggression” flyers. According to the lawsuit, Hiers was never disciplined by the university prior to this incident.

Alliance Defending Freedom, a conservative, Christian nonprofit organization, filed the lawsuit Thursday on behalf of Hiers in the U.S. District Court for the Eastern District of Texas. The case, Hiers v. The Board of Regents of the University of North Texas System, is being led by Thomas Brandon, Jr.

The complaint states that the flyers were left by an “anonymous” person and not part of the university in any official capacity. The flyers warn against “microaggressions” and define the term as “verbal and nonverbal behaviors” that “communicate negative, hostile, and derogatory messages to people rooted in their marginalized group membership (based on gender, race, ethnicity, sexuality, etc.)” which “can be intentional or unintentional.”

[RELATED: Conservative group threatens to sue university over this 2019 incident]

The flyer gives examples of what  “microaggressions” are, including: “America is a melting pot,” “I believe the most qualified person should get the job,” and “America is the land of opportunity.” According to the flyer, these claims encourage the “myth of meritocracy” and advance “color blindness.”

After reading these flyers and disagreeing with the message they conveyed, Hiers wrote on the chalkboard, “Don’t leave garbage lying around,” with an arrow pointing to the flyers. In response, Ralf Schmidt, Chair of the Department of Mathematics for the University’s College of Science, castigated, Hiers saying his actions were “cowardly” and “stupid.” 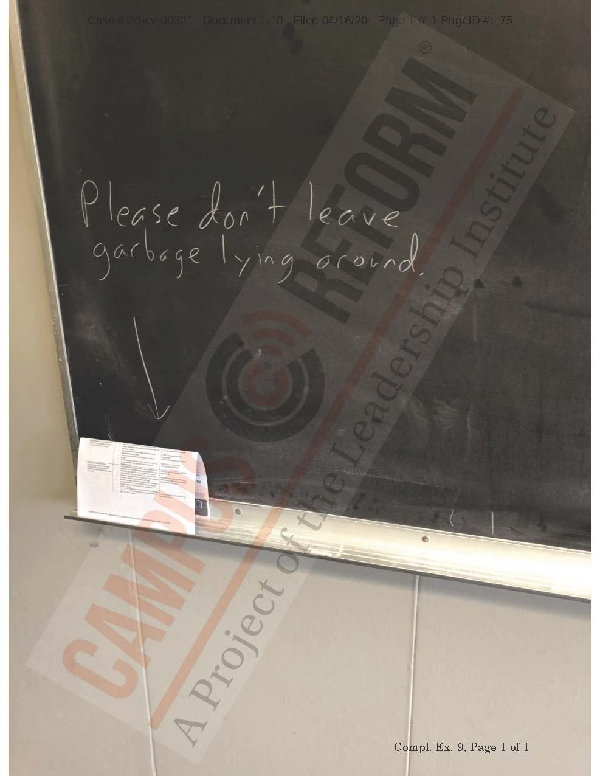 Schmidt claimed that the flyer was not “political” and should be taken as fact, stating that they were uncontestable and “make very much sense [sic]." Schmidt also depicted Hiers’ words as “upsetting," adding that they "can even be perceived as threatening.”  According to the lawsuit, Hiers claims that Schmidt told him that “the implicit message is, 'Don’t you dare bring up nonsense like microaggressions, or else.'"

Hiers refused to “recant his beliefs” and apologize for his statement, further declining to take non-mandatory diversity training. All of these, in addition to Schmidt allegedly telling Hiers that his “actions and response are not compatible with the values of this department," were the reasons Schmidt gave for ending Hiers' employment.

"So with regret I see no other choice than to not renew your employment," Schmidt told Hiers, according to ADF.

The suit characterizes his dismissal as “untimely” and “unconstitutional,” because the defendants did not follow the guidelines in the University’s Misconduct Policy. According to the complaint, the policies that were not followed include the university providing “timely due process for faculty appeals,” the professor’s “right to present evidence,” the University notifying the accused “in writing of the alleged misconduct, clearly identifying, with supporting evidence, which policies/procedures may have been violated,” and the right of the accused to “respond both orally and in writing to the allegations and any evidence presented.”

The suit states that this termination has not been victimless. It has “affected [Dr. Hiers’] professional reputation,” prevented the renewal of Dr. Hiers’ American Mathematics Society membership, caused financial turmoil, inhibited the university’s ability to “give him a favorable recommendation” even when the decision does not relate to “his ability as a professor.”

ADF legal counsel Michael Ross told Campus Reform in a statement, “Universities should encourage free speech, not shut it down. But the University of North Texas fired Dr. Hiers because he criticized a flyer about microaggressions. It punished a professor for daring to think differently, for daring to question a politically correct notion. Yet, universities should be a marketplace of ideas, not an assembly line for only one type of thought. And it is high time for the University of North Texas to realize this and start respecting the First Amendment rights of its faculty.”